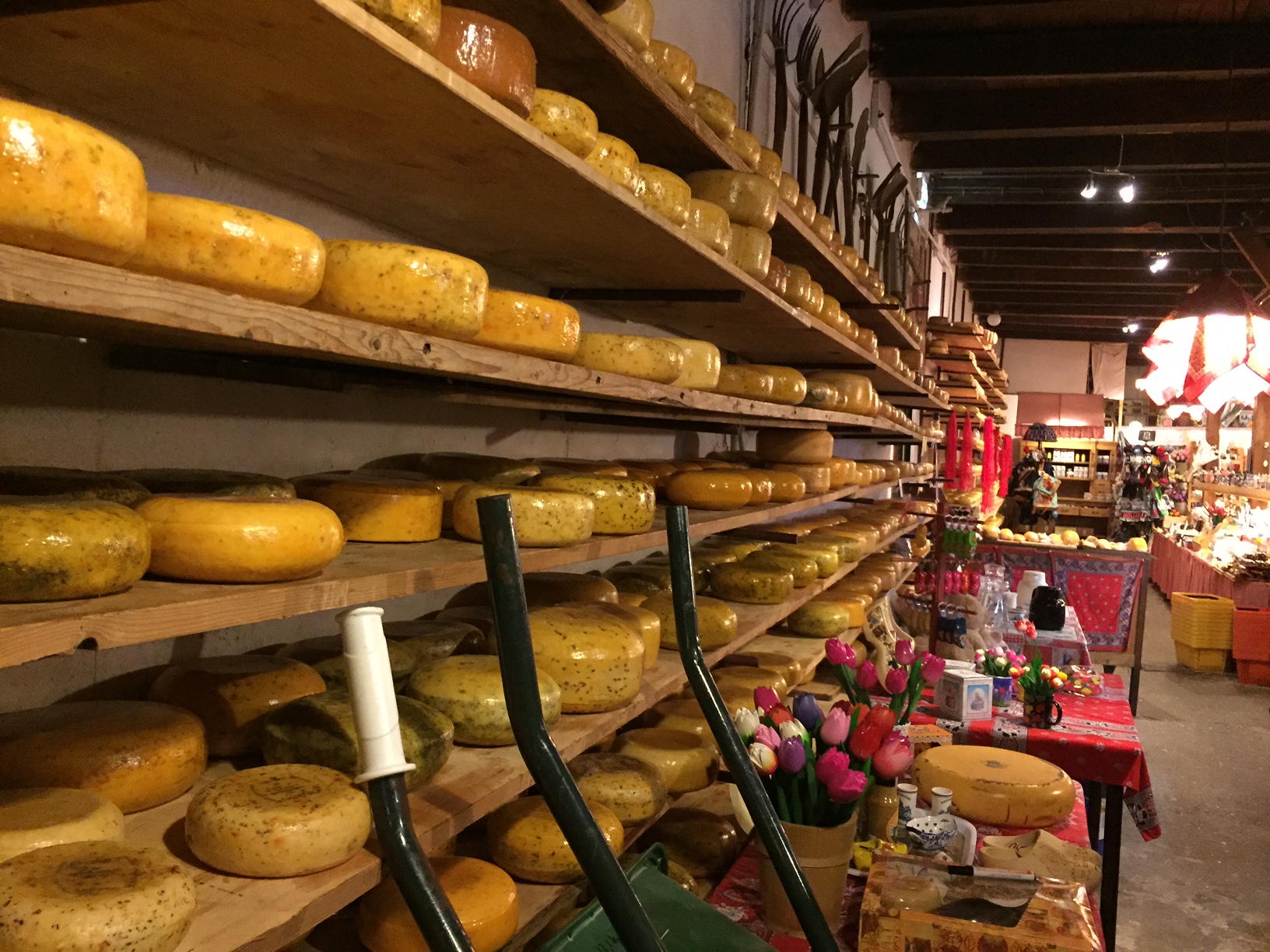 If you were to ask a Dutch person what the most traditionally Dutch dish is, they’ll most likely say stamppot, a farmers’ meal consisting of potatoes and kale or cabbage cooked into a mash, with sliced kielbasa mixed in. The most Dutch you could get is if you used Onux brand sausage, hailed as the most popular throughout the Netherlands (imagine Kraft for meats). However, unless you’re out looking for traditionally Dutch cooking, you won’t encounter stamppot. What you will find, everywhere you go, is kaas. That’s cheese. For those of you who haven’t had it, it’s delicious.

Though the Netherlands produces a number of different cheeses, from edam to limburger, the cheese most popularly eaten throughout the country is gouda. Those three cheeses mentioned are all named after Dutch towns, in which their loyalty to their cheese remains strong. The two varieties are jong or oud (young or old), depending on how mature the cheese is. Young cheese is softer and more mild; older cheese is harder and often more pungent in flavor. In the grocery store, there will be a minimum of three shelves devoted to different goudas, and perhaps one shelf for mozzarella, ricotta, swiss, etc. My roommate and I have been going through different brands of gouda trying to tell the difference, so far with little luck.

Snack cheeses are also a staple of bar food; if you go out for drinks, there’s a good chance you’ll be eating slices of gouda and bitterballen, a deep-fried, bread-crumbed ball of what is essentially gravy. Though delicious, they require some care, as the oily interior remains dangerously hot for a long time.

Though it has a somewhat outsized reputation for being a Dutch delicacy, fresh herring, Hollandse nieuwe haring, is only served between the months of May and July, when the herring is caught in its fattiest state. Gutted and placed in brine as soon as they’re pulled out of the water, the herring can be eaten in a sandwich with onions, but the traditionally Dutch method is holding the fish by the tail, tilting your head back, and dropping the herring down your throat. I can’t say I’ll be terribly sorry to be leaving before herring season comes around.

Much like Indian food in England, the Dutch have taken to the cuisine of their former colony in Indonesia. As ‘Dutch cuisine’ is next to non-existent, Indonesian restaurants are incredibly popular in the Netherlands. Bami goreng are Indonesian stir-fried egg noodles with meat and vegetables, and can be found in almost any neighbourhood in Amsterdam. Sate, skewered meat with peanut sauce, is generally served over pommes frites—a fusion of another dish that the Dutch have taken for their own: french fries. Though known as ‘Belgian fries,’ frites are a popular street food throughout the Netherlands, served with a variety of sauces. ‘Fry sauce’ is mayonnaise, and the mayonnaise served here tastes like tartar sauce. ‘Curry-ketchup’ is far more popular than regular ketchup, which tastes especially vinegar-y. Garlic sauce is a winner; it tastes a bit like creamy aioli.

Though waffles in the Netherlands are not quite comparable to those of their southern neighbour, stroopwafels are delicious and can be found anywhere. Stroop means syrup, and these thin, cookie-sized waffles are coated in syrup, perfect with a cup of tea. At almost every social event someone will whip out a bag of stroopwafels, and they’ll be gone in a matter of seconds.