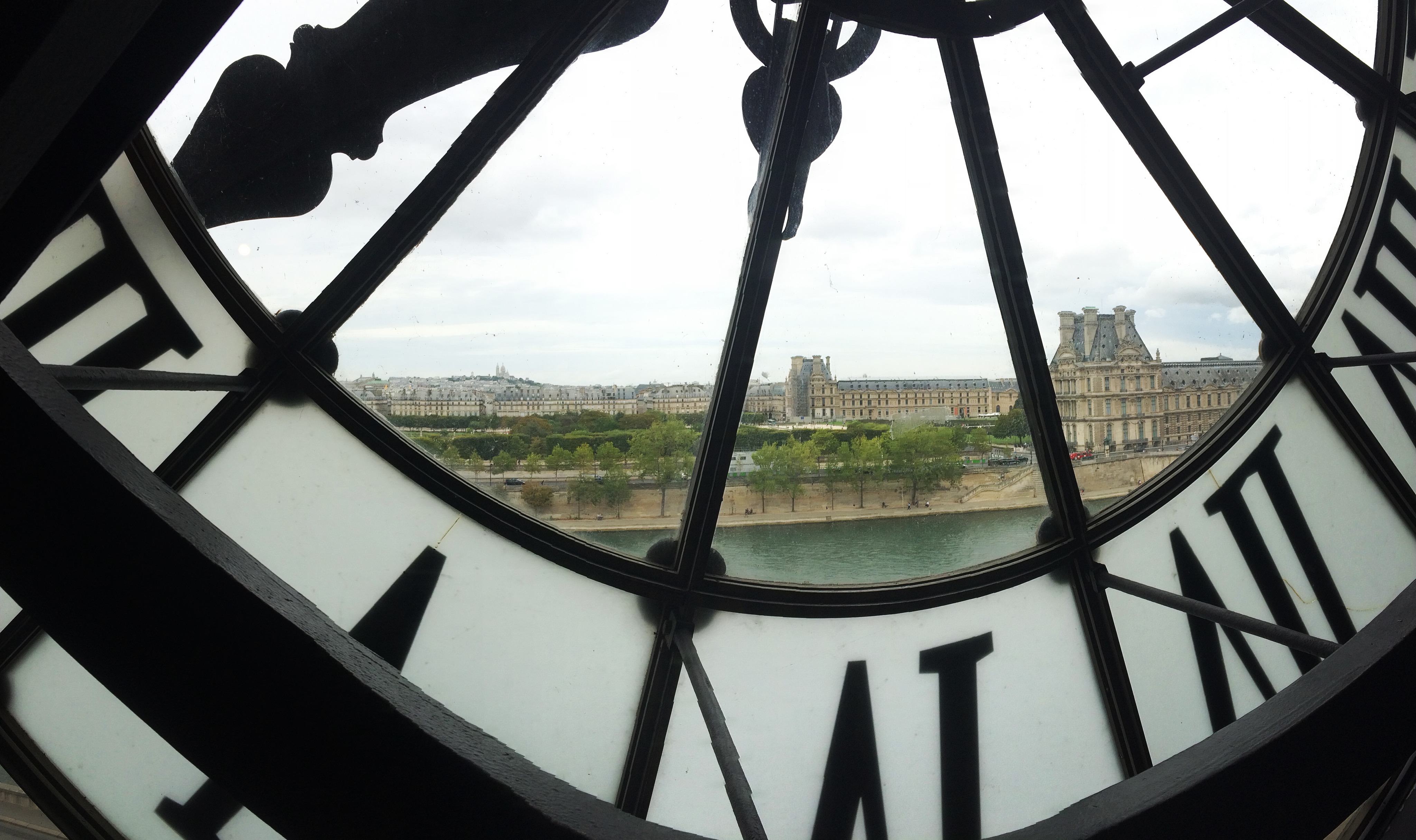 When in Paris, look up. Never mind that the fabled flâneurs of yore have been largely replaced by scowling professionals in navy speed-walking at breakneck pace—what lies above the sidewalks is too beautiful to miss. Take in the towering church facades, the French Renaissance grandeur, the monuments at every corner. Watch for the modest shutters on buildings untouched by Haussmann and the endless repetition of wrought-iron balconies framed by columns adorning those which constitute his legacy. This last image is the one I wake up to every morning. I then lean out the window and into the city bustling below to allow the breeze to remind me that I’m not hallucinating, but also because it seems like the appropriate thing to do when in Paris.

We are at week three in the city of lights, love and all things chic, and I am just now beginning to settle into a routine. The past few weeks could be described as overambitious tourist agenda meets freshman orientation meets the world’s greatest bureaucratic nightmare (that is, registration for French university classes). I’ve been immensely lucky, however, to come home each night to a beautiful apartment in the eighth arrondissement (the system of numerically delineated neighborhoods in Paris), just around the corner from the Gare Saint-Lazare and down the street from the grands magasins Galeries Lafayette and Printemps on Boulevard Haussmann. In what can only be explained as ResLife karma compensating for my two years in Raymond House, I’ve been blessed with perfect host parents to match this perfect abode. Lovers of art and good food, they are truly my role models when it comes to la vie parisienne. And as if I wasn’t already feeling at home, my host mother (a restorer of paintings), like my real mother (an artist), has her studio just across the hall from my bedroom.

The repose afforded by my homestay has been invaluable, but fleeting. After a first week of Paris-specific orientation (and free time spent enjoying free entry to every Paris art museum with my student ID), we began classes at Reid Hall and our respective French universities. Reid Hall, where I’m taking a film class, is a charming building owned and operated by Columbia University that houses multiple American study abroad programs, including VWPP. The classrooms are small, the garden rings with lunchtime conviviality, and the professors speak slow and beautiful French and call us by our first names.

The Sorbonne, on the other hand, is terrifying. I’m taking three classes there, but getting to that point was not easy. In fact, I’m still not fully sure if I’m officially signed up for some of my classes, because the registration process involved (after waiting in multiple lines at multiple locations) merely writing my student number and email on several hastily-drawn t-charts. This does not provide the same sense of confirmation as clicking “submit” on Vassar’s online pre-registration months before the start of classes, a process that now seems like a dream. Nor does inscription pedagogique, as this administrative tumult is known, afford the same convenience. For example, when I asked a professor where I could find the hours for registration at the History Department, he told me I’d have to check the door. Said door, it turns out, was located thirty minutes away by metro. I decided that history wasn’t my strong suit anyway.

With registration behind me, I was bright-eyed and, as I always am, looking forward to syllabus week. Unfortunately, none of my classes have a syllabus. None of them seem to have any homework either—when I asked my Art History professor if she would assign or suggest any readings to correspond to the lectures, she said no, “you are adults.” I asked if we’d need to buy the books she had referred to in class as essential. She looked at me, horrified, then promptly realized that I’m American, and said no, “students are poor.” This may be true, but students here are also impeccably well-dressed, armed with fancy pens, slightly brooding (usually with a cigarette), and all already friends with each other. In any case, I have a lot to learn.

Besides the academic trials and tribulations, adjusting to life in Paris has gone relatively smoothly. It’s hard not to fall in love with a lifestyle that ritualizes the lunch hour, a sacred period during which all business seems to adjourn. Any time I see someone between the hours of noon and two, they wish me bon appétit, even if I wasn’t planning on eating yet. There are, of course, the little things. Wearing workout attire (especially shorts) in public, for instance, is generally not done unless you are actively running, but is otherwise a good way to get people to stare at you. Everything here is also smaller: the chairs, the people, a medium coffee to go (roughly the size of a Dixie cup you might find next to a water dispenser). While Paris is a big city like any other, one of the more visible points of difference at the moment is the massive security presence. France’s current state of emergency in response to the recent terrorist attacks is heavily evident. Armed guards, national police and military personnel occupy almost every busy street corner, and security guards inspect your bags at the entrance to nearly every major retail store, museum and public building, including universities. After a while, it’s easy to allow these presences to fade into the background. There is a tension, but it surfaces mainly when you catch sight of the news on a TV screen, when uniformed men with huge guns are checking the windows of every parked car at Sacré-Coeur, or when your train is stopped in the metro after reports of an unattended suitcase at the next station. Those are the moments of unease, but it’s an adjustment like any other.

As I sit by my bedroom window wrapping up this post, the voices of a group of bon viveurs at a café on the street below mingle first with a French rap song emanating from a soirée at someone’s apartment, then with what sounds like a kazoo version of Bizet’s L’Arlesienne. At the end of the latter, the crowd erupts in cheers, then promptly disbands, probably to get the last metro. C’est Paris.