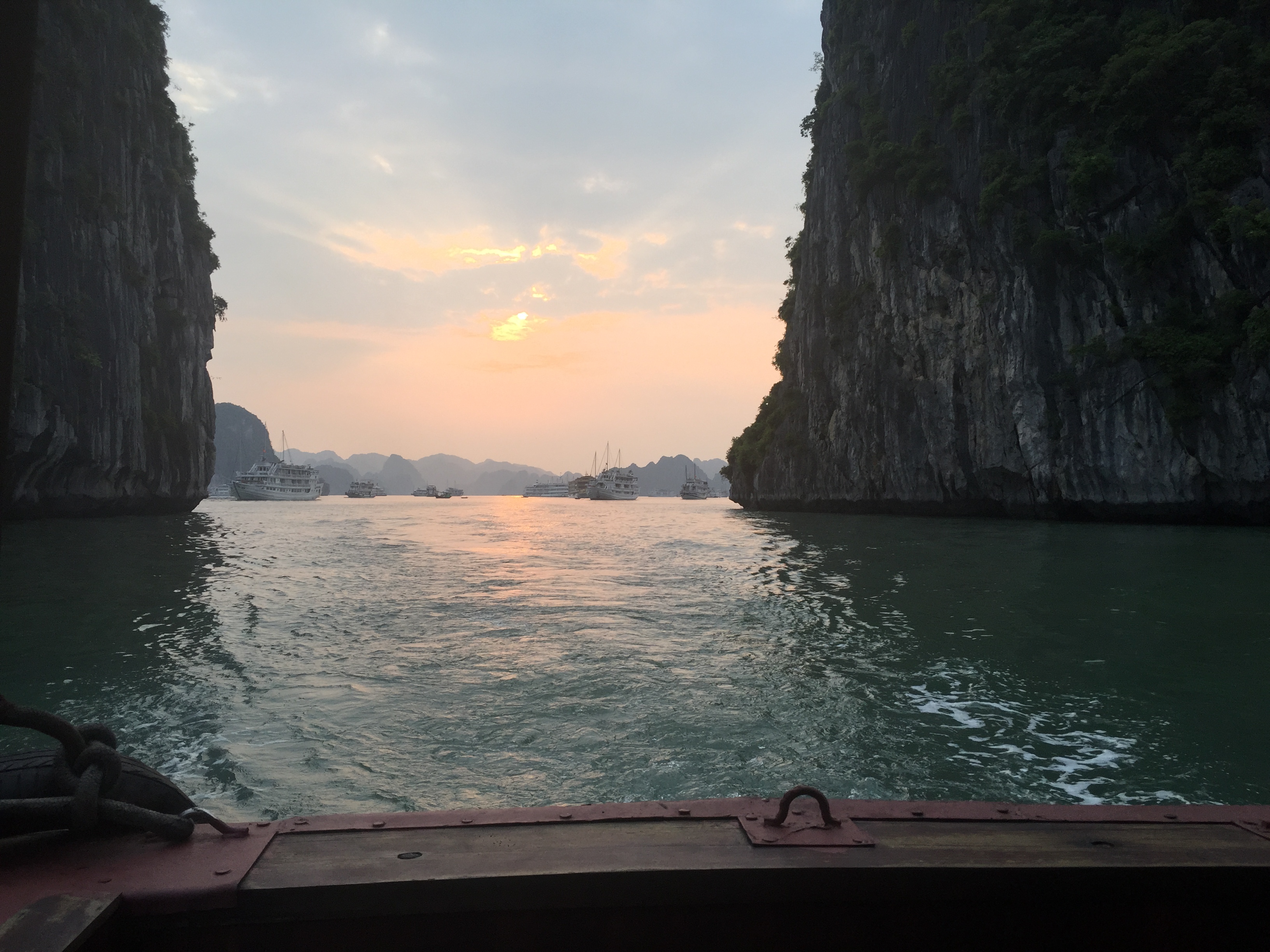 When I heard that I had a window seat for my 14-hour flight from San Francisco to Taipei on my way to Vietnam, I could barely contain my excitement. I was going to get to see the sun reflect off the beautiful Pacific Ocean as I left the continent for the first time, maybe even spot Hawaii! My excitement wasn’t dimmed by darkness as we left San Francisco; the moon was beautiful, and a 14-hour flight would surely involve some sunlight and stunning vistas. However, as I watched the little plane animation on my seat-back television, I was confronted by the unfortunate reality that we would remain blanketed in darkness all the way across the Pacific as the earth turned, and the only vista I enjoyed was the warning light on the edge of our airplane’s wing. One thing I have learned abroad so far is that time zones (and time) are complete witchcraft; we left San Francisco at 1 a.m. Monday morning, and landed in Taipei at around 6 a.m. Tuesday morning. Thinking about it now, I still don’t really understand how that happened, so if you understand please let me know. Anyways, after playing some card games and hanging out with a ridiculously cute young child in the airport in Taipei, we landed in Hanoi at 11:30 a.m.

The first thing I noticed about Vietnam out of the airplane window was how spectacularly green and beautiful it is; the first thing I noticed upon stepping out of the airport was how oppressively humid it is. The rainy season is approaching, and I immediately regretted my choice of dark blue jeans. Another distinctive feature of Vietnam that stood out much more upon making it to solid ground was the sheer number of motorbikes, and the almost admirable abandon with which everyone speeds around. Traffic laws in Hanoi appeared to be almost nonexistent and certainly weren’t observed by the vast majority of people there. Despite this chaos, I didn’t observe a single accident (although I did observe enough close calls to begin developing heart problems). In fact, I found myself wondering whether such a system would work in the U.S.; being forced to avoid death by motorbike at all times certainly keeps pedestrians and motorists alike off their phones! The next day we took a tour of the city, and visited a number of notable sites in Hanoi. The old literary temple retains stone carvings of the names of everyone who has ever passed the civil service exam in Hanoi, dating back to when the temple was built in 1076 AD.

After asserting ourselves as tourists by taking approximately two to three billion pictures of the immaculate landscaping and ornate roofs, we headed to an idyllic pagoda on an island that stretched out onto a wide lake before watching an impressive water puppet show.

The rest of the week flew by in a blur of classes (bet you thought I forgot about those), guest lectures, close calls with motorbikes and delicious, wonderful, incredible Vietnamese food. Recalling the heavenly pho I ate for 35,000 Vietnamese dong (~$1.50) makes me even more reluctant to return to the Deece (reluctance surrounding the Deece is likely going to be a continued theme of this column). We also had lots of fried rice, banh mi and bruschetta from the “Irish” restaurant next to our hotel, which was surprisingly delicious!

On the weekend, we took a bus to Ha Long Bay, which is a UNESCO World Heritage site filled with breathtaking islands that show the geological history of the region. Even the bus ride to the bay was a highlight; I spent four hours both ways just staring out the window at the fields and greenery. Once we got to the bay, we boarded a tour boat and started out into the bay. The view took all of our breaths away; it was a sunny day and the islands floated by with an otherworldly feel. We kayaked, hiked, swam and ate great food on our boat, where we slept overnight surrounded by islands and other boats; seeing all of the other boats lit up at night was just one of the many beautiful sights in the bay.

To complicate our conception of this paradise, however, we had a lecture about environmental degradation in Ha Long Bay, caused by pollution from floating villages and the type of boats we were on as well as runoff from a coal plant 20 km away. I’m very thankful that my program has pushed us towards being more mindful visitors than we otherwise might be if we were simply tourists, both at Ha Long Bay and at other sites.

After returning to Hanoi, we had a few more days of classes/guest lectures/food before boarding a short flight to Hoi An, on the central coast of Vietnam. Though we spent more time waiting in the terminal than actually flying, I was thankful not to have to endure another long bus ride. Hoi An represented a big change for our group; we were experiencing homestays for the first time after three weeks of hostel/hotel living in San Francisco and Hanoi. My host father doesn’t speak much English, but he and his wife are so kind and sweet; many of their children and grandchildren are also in and around the house, and we’ve been able to get to know them as well. Hoi An is slightly slower-paced than Hanoi, and our group is navigating around by bike, which is both fun and slightly stressful.

Another incredible aspect of Vietnam has been the sheer volume of cute dogs present everywhere! It seemed as though every time I was having a bad day (and also when I wasn’t) a fluffy puppy would appear from nowhere like a gift from the heavens. I saw a gorgeous husky puppy next to the old lake in Hanoi and a dog riding a motorbike (accompanied by its human) with its paws on the handlebars. In Hoi An, I ran off of our tour bus to say hi to some Dalmatians, and at the market yesterday I saw a puppy that almost stopped my heart. 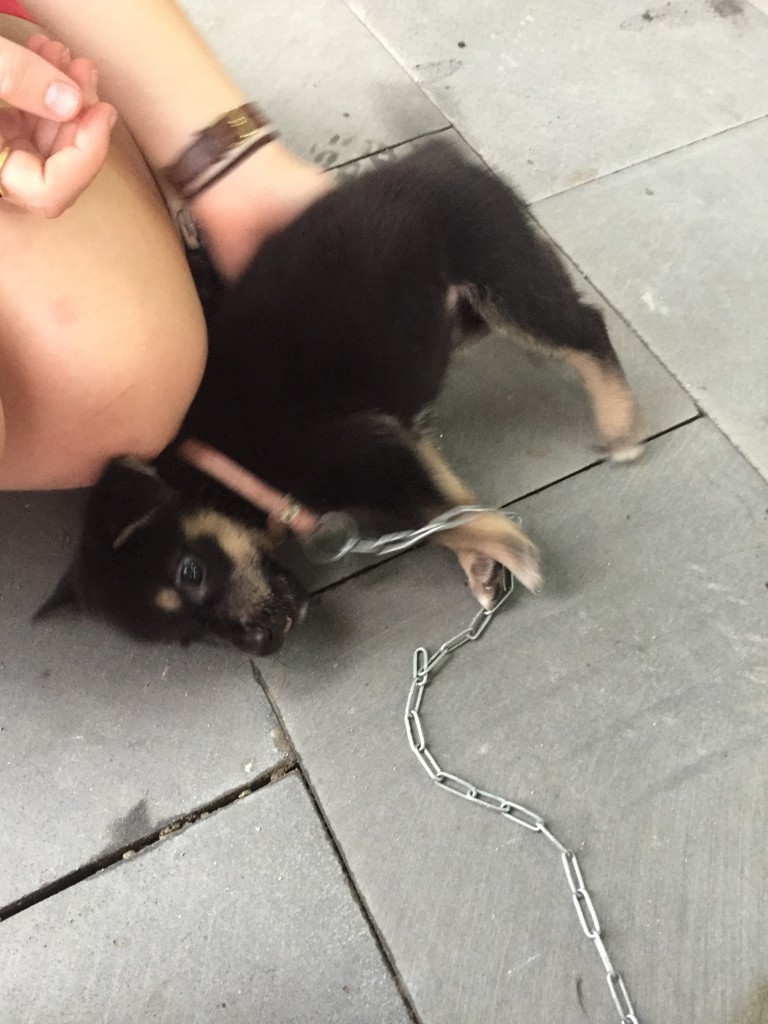 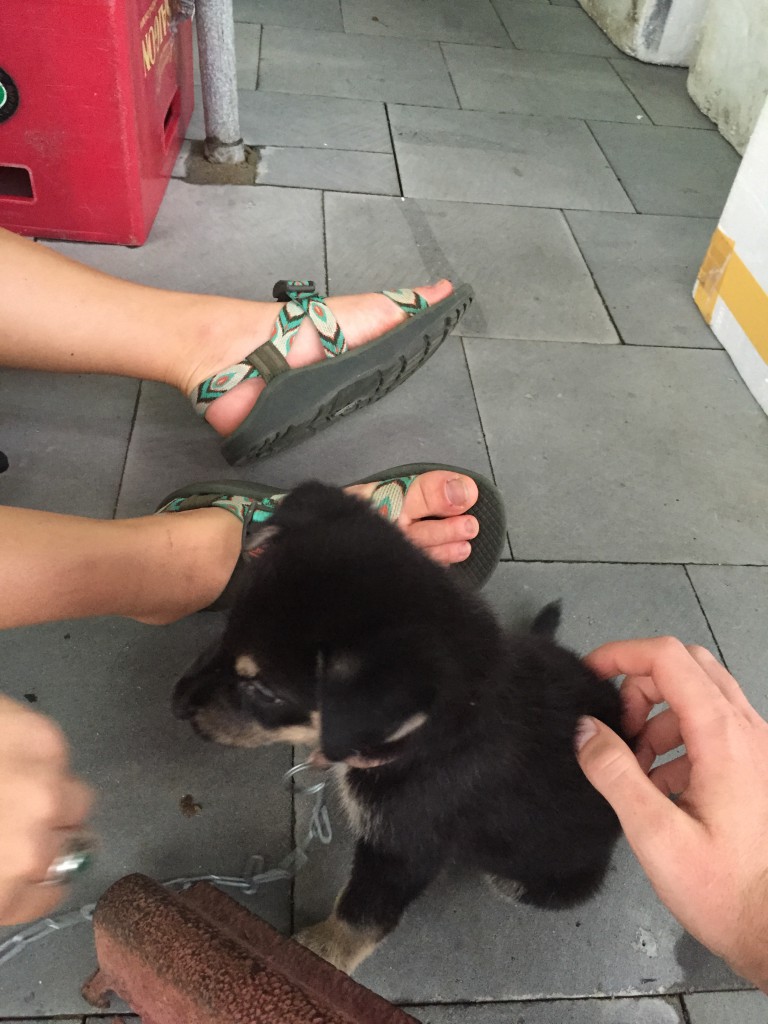 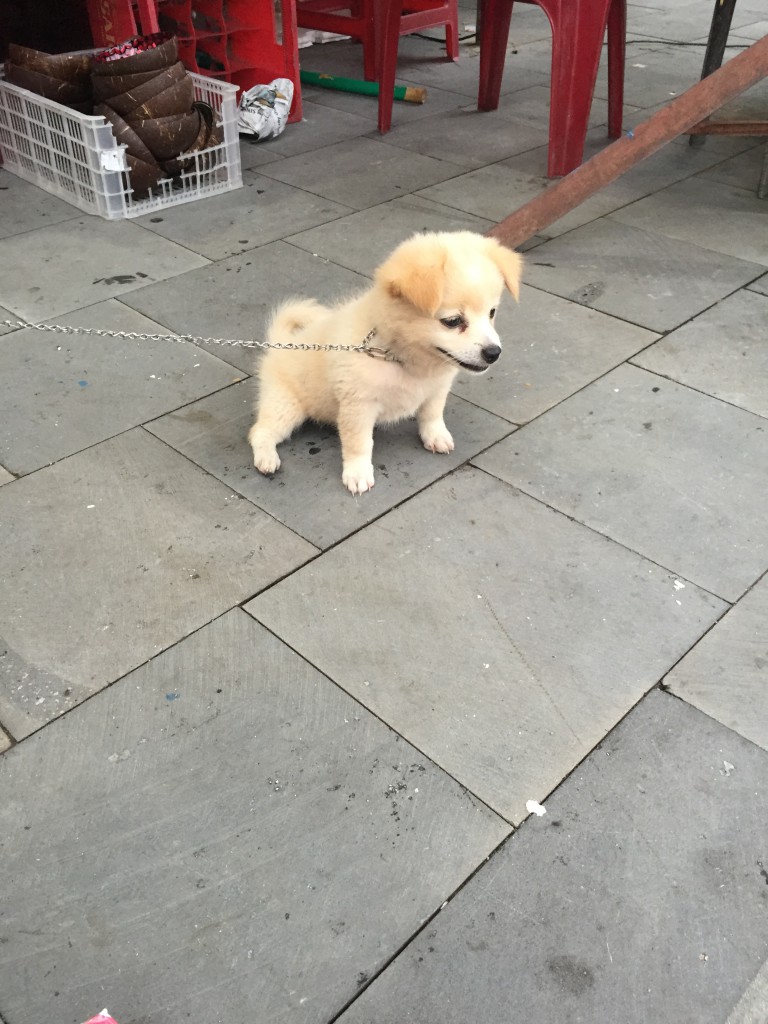 Laying on my homestay bed, I’m pretty thankful for how eye-opening and memorable my abroad experience has been so far; it’s been such a breath of fresh air to see so many new places and learn so many new things. I will admit there are parts of Vassar I miss, like fall leaves and friends. That being said, I remain unbelievably excited for the rest of my time abroad, and I’ll update again soon!