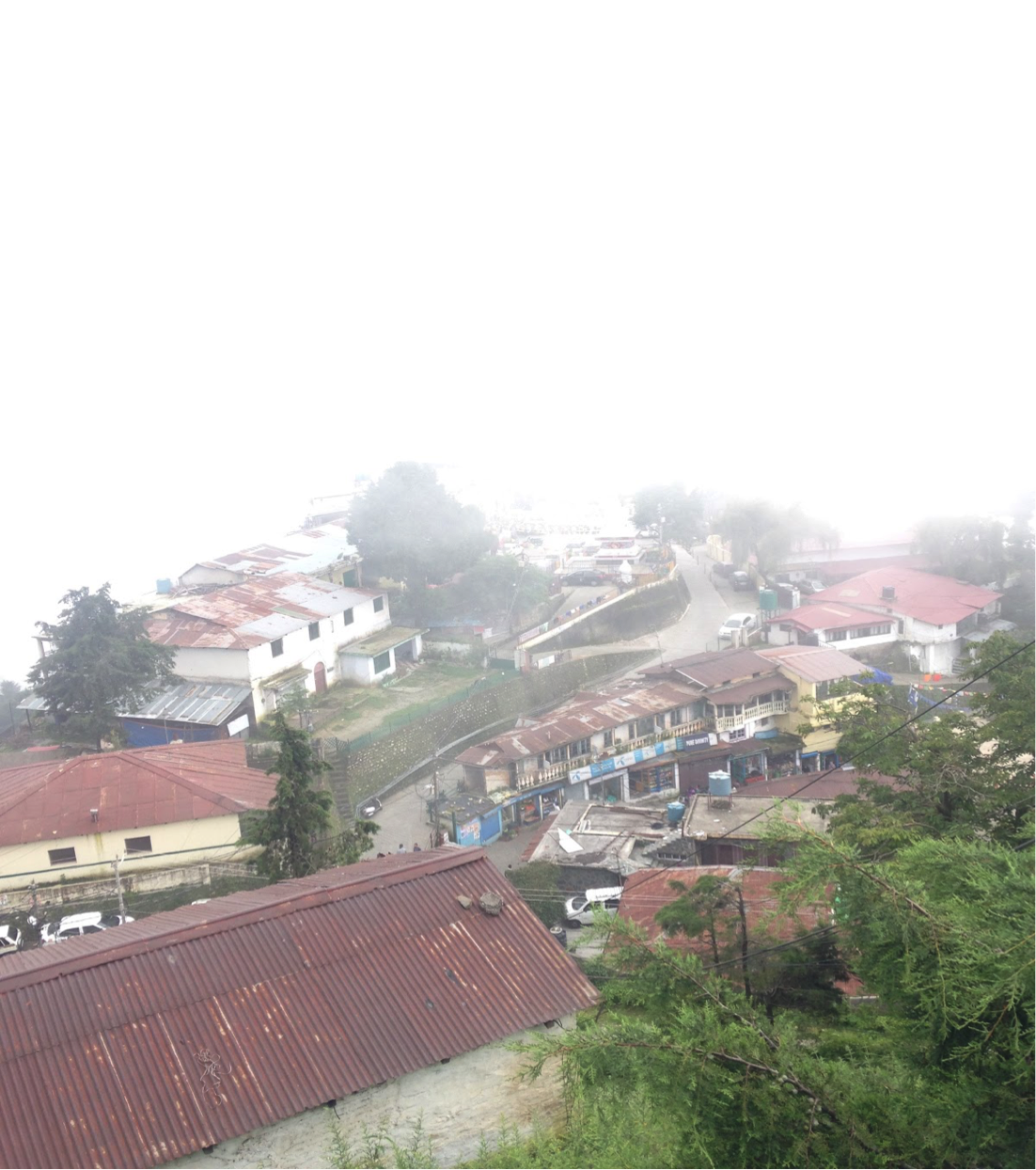 A few weeks ago we left New Delhi and started the next leg of our journey. We woke at 5 a.m. to catch the train to Mussoorie. The train was lovely, but once we got off it was stiflingly hot and crowded and smelled of car fumes. We took a wild ride up to 7,000 feet—I was exhausted afterwards from being so tense as we curved around cliffs and honking cars up and up narrow roads. Then we reached heaven.

La Villa Bethany is one of the most magical places I have ever been, a little guest house that seems to rest in the clouds amidst green trees and wild dahlias. The mother who runs the inn was very kind and served us a large breakfast and dinner every day. For dinner she cooked food from different parts of India so we could experience those places even if we weren’t traveling there. The flavors and ingredients of Southern India, for example, are very different than those of Northern India. I have had quite a few vegetables and flavors I never knew existed. She told us about the ingredients and the preparation, which give you clues to where the places are—coastal or inland—and what kind of weather they have, depending on how much hot cooking is involved in the meal. We tried to cook lunch the other day as a group, but it was hard to organize everyone in the small kitchen. I have a new appreciation for how much good food comes out of that tiny kitchen. Sunita is also pretty good at western food as well—we had killer veggie lasagne yesterday.

There was a girl in fourth grade and a one-year-old little boy whose nickname is the word for a round Indian sweet. There were three big, fluffy, friendly dogs. For lunch we got to explore the various restaurants and shops nearby and walk on trails in the woods with monkeys perched up in the trees watching as we passed.

We have had some amazing guest lecturers. We met Steve Alter, who is an expert at the pilgrimage trails around the Himalayas; he studies the sacred space in nature from an atheist perspective. He said, “doubt is as strong a motivation as faith.” We also met his brother Joseph Alter, who is one of the world’s leading experts on the history and ethnography of yoga. It was like meeting a celebrity because I read some of his books and articles this summer for my research. Interestingly, he said that there hasn’t been much research on women in yoga, so it’s is exciting that I’m doing something kind of new. Our other guest lecturer was an elderly lady named Zerina Bhatty, who was instrumental in the beginning of the feminist movement in India.

About a week ago now we returned for Delhi to a day; it was amazing how much more comfortable I felt there after being in India for just a little while. Then we were on the road again to Jaipur, which is nicknamed the Pink City because Old Jaipur is composed of coral colored buildings.

On Sunday we were picked up from the hotel by our host families. I have a host mom, dad, 17-year-old sister and 14-year-old brother. I am also staying with another girl from the program. Her name is Floor, and she’s from the Netherlands. She is a good positive person to have around, which is nice because we are sharing a bed for the next five weeks. Our host mom is very sweet. Her name is Meenakshi Sharma and she is a tailor, so she offered to sew us shirts if we buy fabric. Our sister is an amazing artist; she said we could invite the other girls over for a hena party. I am trying to use my Hindi as best I can, but our parents also want to practice their English.

There are two other American girls from a gap year program staying with us for a few days. Yesterday we were sitting around the dining room table with our host sister eating dahl, rice, roti and curried vegetables talking about where else in the world we want to travel. For a second I forgot to appreciate how amazing the interaction was—all of us young women randomly finding ourselves at one table at one time at one family’s apartment in one city far from home in India. After dinner we walked down the street to Ganesh Temple. I can still feel the dirty marble under my feet as we walked in a line through the temple and back out again. It was an interesting view into how religion functions in habit and life, but it held no deeper meaning for me because I don’t have the faith to see any deeper dimension.