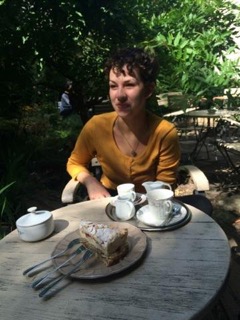 “It’s not much farther,” Nina promises me as we climb another centuries-old cobbled hill. Thirty minutes later my hands have begun to blister from my unforgiving Czech crutches. Nina is a Prague native and student at a local university, and she doesn’t notice the sweat beading on my forehead as she rants and rails about her “almost boyfriend.” I should have listened when my program director told us how much the Czech love to walk. We’re now on our way to the metro after a night in one of the hippest Prague clubs—the outdoor Club Stalin. Nina agreed to leave early with me so that my slow pace caused by a newly sprained ankle wouldn’t make me miss the last train. The other students in my SIT Czech Republic: Arts and Social Change program are still perched on the wall at Club Stalin where the namesake of the establishment—a giant statue glorifying Stalin—once stood. Now a giant metronome and dozens of international hipsters define the landmark.

Nina and I finally arrive at the station, and she sees me onto my train with a kiss on each cheek and a “ciao” called into my hair. Back in the hotel I’m staying in until I’m assigned my host family, I lay in bed and will myself not to cry. My program director assured the nine students on my program that after the initial honeymoon phase, we would all disintegrate, when the new would no longer seemed magical and the uncertain manageable. I was thrown into my disintegration phase barely after arriving when I tumbled down a set of old Czech stairs onto a jet lagged ankle not ready to “hit the ground running,” as it were. After several days of limping through the sites of famous Czech revolutions, my ankle resembled an overripe plum and my program’s assistant took me to the hospital for the most surreal night I’ve ever experienced.

The large institutions in Prague are leftover from the recent socialist era, and in these places Kafka is not an author but a way of life. A vestigial socialist ideal is that institutions should have emotional distance and no face. None of the patients I see in the emergency department of FN Motol hospital have gowns or ID bracelets, much less the anti-slip socks that American hospitals give away like lawsuit-avoidant lollipops. After being processed by the foreign patients department, I am given a number and told to wait until I see it appear on the LED screen in the waiting room. Imagine a Soviet DMV.

After wandering through the hospital’s dark basement to find the X-ray room I am guided past rows of filing cabinets onto a cold metal table. I am not given a protective lead gown or told what is happening as the technician takes a rapid fire series of images. I limp back upstairs to wait for the LED screen to call me back into the “traumatologie” section of the emergency department.

Four hours later I am set free, bewildered and lonely. I take with me a large ankle brace, the smallest healthcare bill I’ve ever had (equivalent to less than $150 USD! Total! Including X-rays!) and remarkably painful crutches. The open-cuff forearm crutches favored by Czech hospitals require (much!) more upper body strength than the American underarm crutches and have a special piece of plastic whose main purpose seems to be bruising the wearer’s elbows. Over the next week my shoulders will grow strong and stable and my hands and elbows calloused, but I don’t know that yet. I know how much I want to fly home to my parents and my dogs, and I know how insignificant I felt as nurses barked at me in Czech. In that moment I don’t know yet that these same crutches will help me transition from disintegration to the next phase—adjustment.

On the nights when I can’t bear to walk to the pub with my group, I’ll be surrounded by caring host parents and five amazing host siblings ranging in age from seven to 22. We’ll talk about everything from feminist computer programing to Soviet cartoons, all while eating endless cakes. My littlest host sister will jump around the flat on my crutches giggling and will hug me after doing so. Every day I’ll leave early for school—careful to insure that my slow gait won’t make me miss a minute of my phenomenal classes—and feel extra independent for navigating my commute on glorified canes.

Four days after my visit to the hospital as I come home from Club Stalin I still don’t know that these crutches will be present at all my important moments settling into Prague. My hotel room spinning from exhaustion, frustration, and ubiquitous Czech beer (it really is cheaper than water here), I mourn the abroad experience I thought I was getting. If you replayed the moment when I sprained my ankle and listened really closely, you could probably hear the universe laughing at my meticulous preparation and research. Before leaving North Carolina I’d read articles and blog posts, Kafka and Capek, searched “Prague” on Instagram, and queried everyone I know who’d ever studied here. Next to none of the things I’d expected have come true so far and at times I want to give up, but I can already feel myself falling in love with trams and Czech cinema, with omnipresent solar panels and Czech sarcasm. I was abruptly thrown out of my dream of Prague, but the real place is more interesting. I’ve now been in Prague for almost two weeks and the only thing I can say with certainty is that I have no idea what I’ve gotten myself into—and I wouldn’t have it any other way.