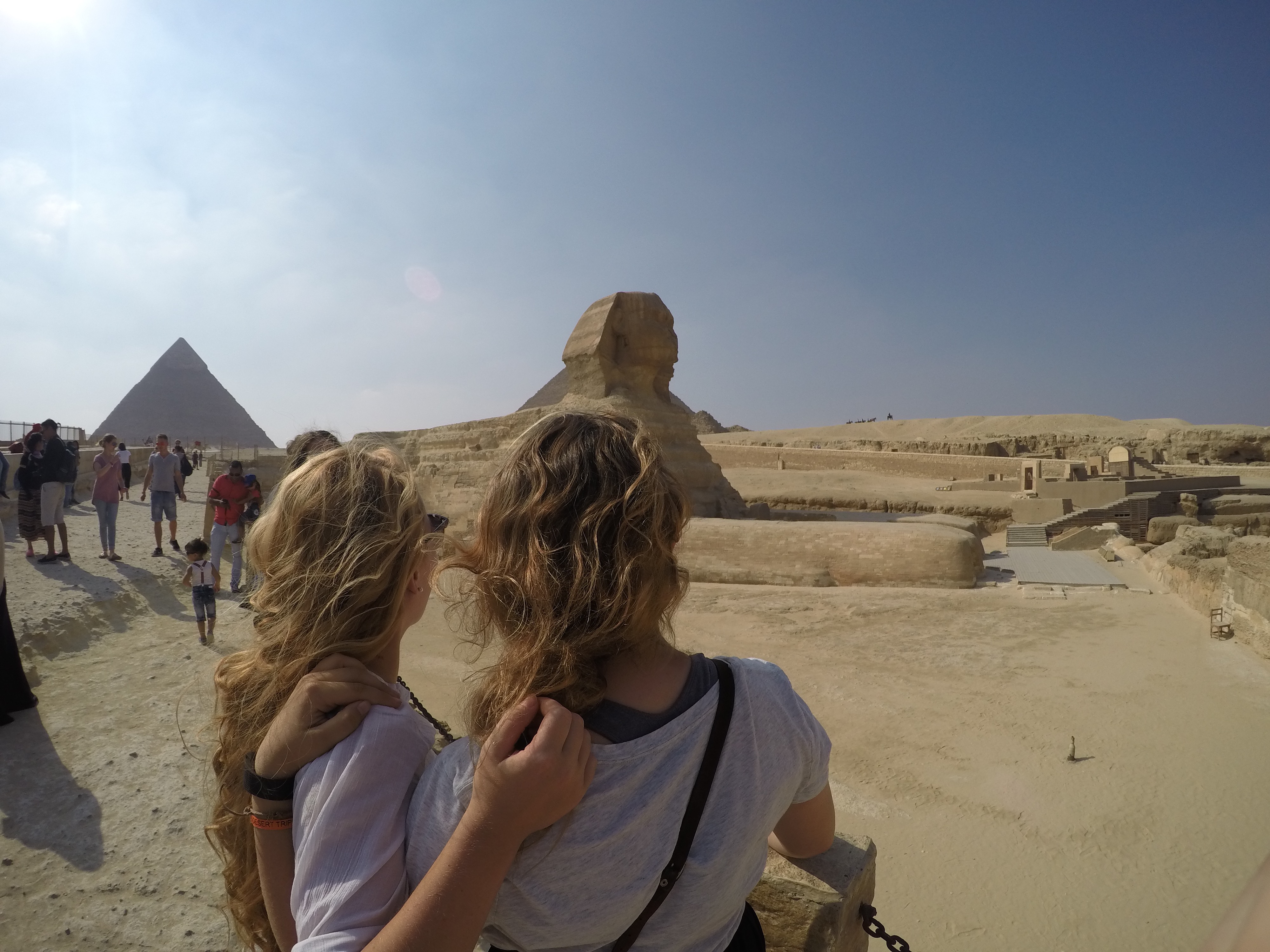 Before I made my new home in Egypt, I consistently received two reactions to my decision to study abroad at the American University in Cairo. One reaction was excitement for the pyramids using ancient Egyptian history as a symbolic feature of the supposed life in Cairo. The second reaction revolved around questions of safety, especially coming from my home community. Growing up in and around San Bernardino, California for almost my entire life before Vassar became an unswerving component when discussing and thinking about my study abroad plans, not to mention any tentative post-grad ideas.

Some of my community members focused on the pyramids of Giza and the Sphinx. While this response carried a lighthearted nature, it occasionally showed a lack of understanding of contemporary life in Cairo. It seemed that, in some cases, people were more comfortable with the often-idolized ancient history of Egypt rather than the current culture, traditions and life. Ancient Egyptian history, while fascinating like other historical periods of the world, is not inherently indicative of the present culture in Cairo. The excitement around the pyramids that I intermittently witnessed seemed genuine but rarely overpowered the sense of fear of the Middle East and Egypt in particular.

In a community reeling by a recent massacre in December 2015, I distinctly felt the presence of questions and comments such as :“Are you scared for your safety?” “Look what has happened in San Bernardino. Why do you want to go there?” This is not to say I didn’t receive the same or similar questions from other sources. However, the reactions from my home community members uniquely affected me. Was I scared to go to Cairo? Yes, of course, but not in terms of security. The massacre had challenged my sense of security already. Back at home that December I had felt the pain, the anger and the fear surrounding me. I had witnessed the, at times, discriminatory backlash. I simultaneously felt shaken and responsible. I felt responsible for my community’s reaction; why couldn’t everyone see past their fear and not use a religion, an ethnicity, an identity and other descriptors as a scapegoat? As a student focusing my studies on the Middle East and the Arabic language, I felt some of their pain directed at me; people would commend my educational pursuits as a means to “stop these people,” or berate me for “fraternizing with terrorists.” On some level, I subconsciously felt guilty for pursuing my passion and attempting to eradicate cultural discrimination whilst knowing I was not entirely immune myself. I struggled grappling with my own pain, privilege and necessary areas of improvement concerning my thoughts and actions. These feelings were in part consequences of the reactions I received, and I packed a few of them in my baggage as I left for Egypt.

Thankfully, as a consequence of airplane delays, my flight had to be rerouted and my bags were lost for four days. It was not my intention to wear the same clothes for six days straight, including two days in transit, and smell no less than abhorrent for the international student orientation. However, through the experience I was swept away by the orientation activities and trips. I had no time or capacity to remember the guilt or the focus on the pyramids. Cairo life for me became the sights in the street, the new Arabic phrases, the food, the impact of the religion of Islam on the sense of community and identity and the general bright colors of décor mixed with a desert backdrop. 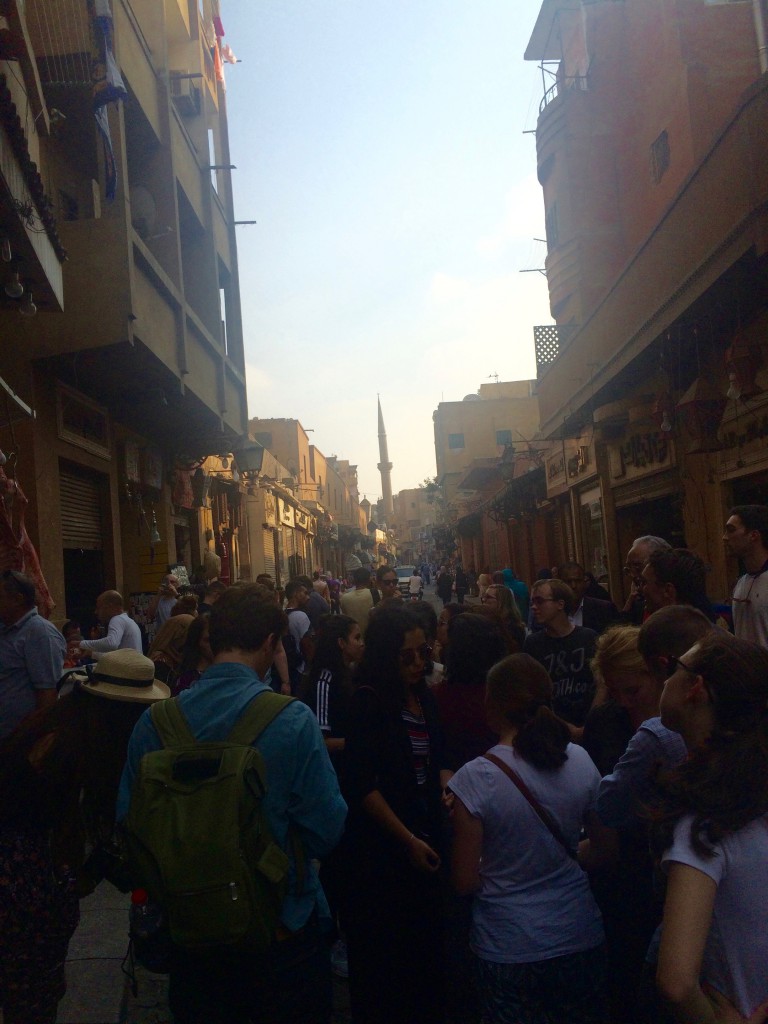 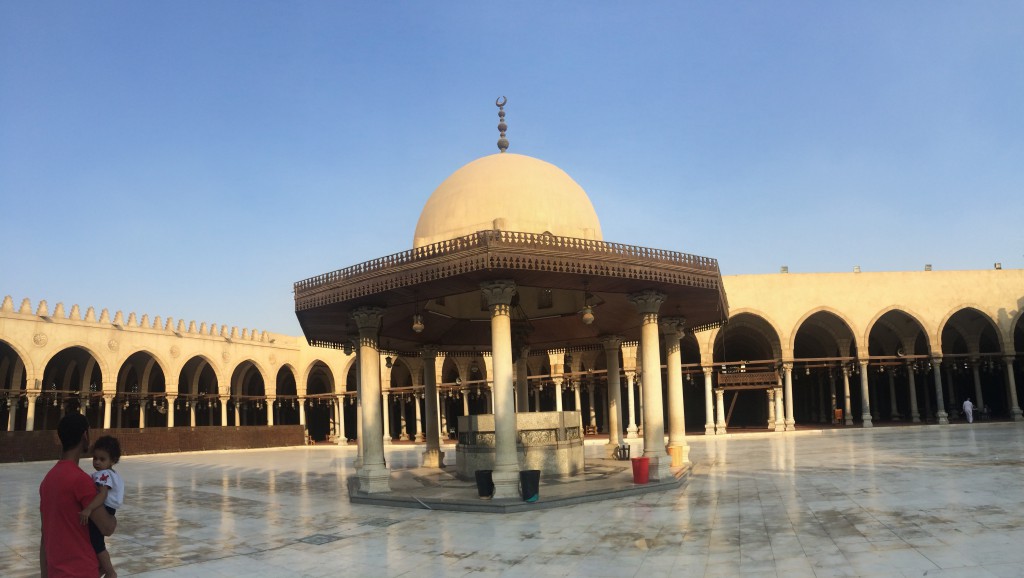 While I do not claim to comprehend the lifestyle in Cairo having only lived in certain dimensions of the city for only two weeks, I do not believe that life in Cairo revolves around ancient Egyptian culture. There are some commonalities between the two cultures, such as the importance of the Nile. However, while the pyramids are present, there are no great temples in Cairo comparable to the famous ancient temples found in Luxor. This is partly because they were utilized starting in the Middle Ages as a source of limestone for mortar. Ancient Egyptian civilization therefore exists through some of the prevailing buildings used as an adhesive, metaphorically representing the way ancient Egyptian history can be used as an adhesive for Egyptian culture. One of the International Peer Leaders (IPLs), our guides for orientation and the year, explained how ancient Egypt provides a historical period where Egyptians can feel pride. Yet, when we went as a group trip to the pyramids, we realized that for some of the IPLs it was their first time, even having lived in Cairo for their whole lives. This presents one example of how Cairo life is distanced from the ancient peoples and their distinct culture. This can be true even for foreigners. When I asked one of the German international students his thoughts on the pyramids and the Sphinx he said, “I wasn’t impressed. They seemed rather smaller and more boring than I had imagined.” However, in later conversations he talked about how much he loved the Egyptian culture he had interacted with during our first two weeks. In other words, the limited Cairo culture we have experienced neither revolves around the pyramids, nor is it constantly plagued by security fears. 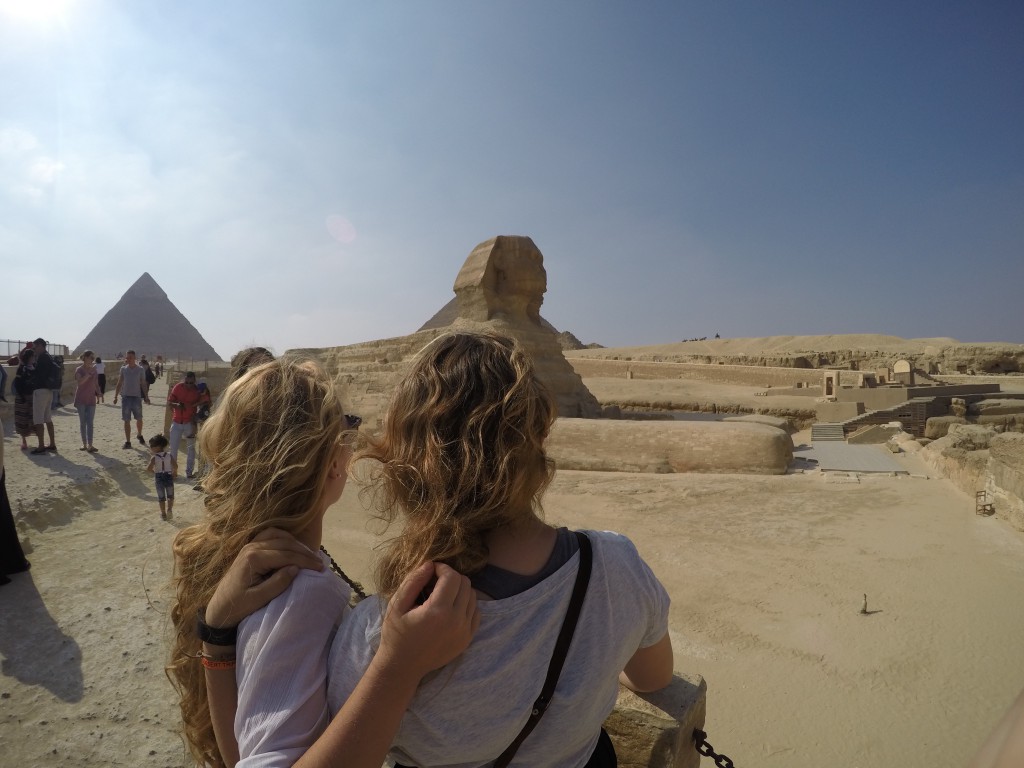 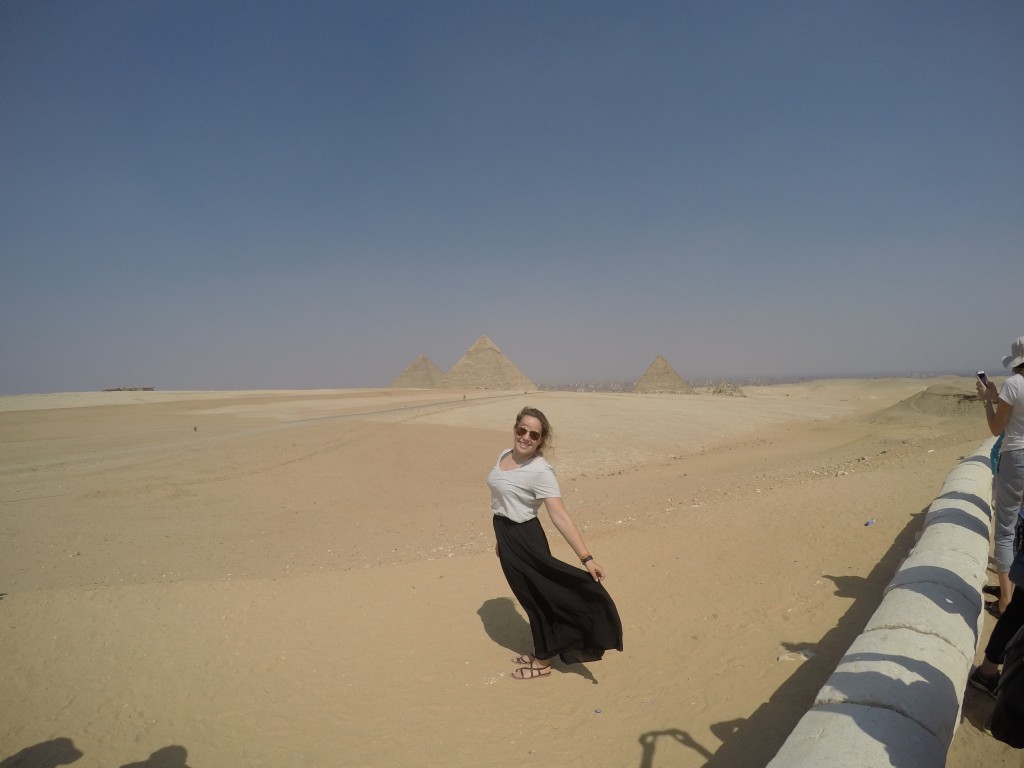 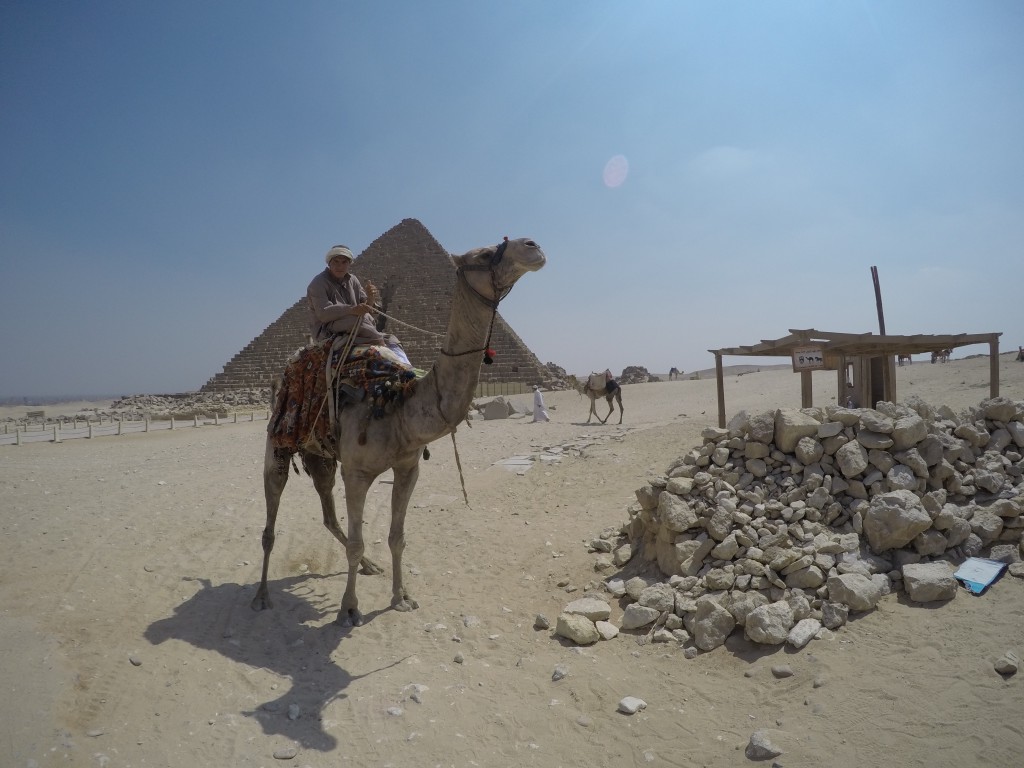 Just as the pyramids are ancient relics of the past, so became my concern for my home community’s reactions. Perhaps my concern was lost in transit, weakened after a transformative summer in Amman, Jordan. Or perhaps life in Cairo removed from vocalized reactions transposed the boundaries of thought and opened the doors to a vastly different experience from anything in my life, including my summer in Amman. Cairo has already started to cement itself as one of my homes, and I look forward to continuing to learn, experience, and adventure without the unnecessary baggage (albeit fortunately with clean clothes and a less pungent smell).