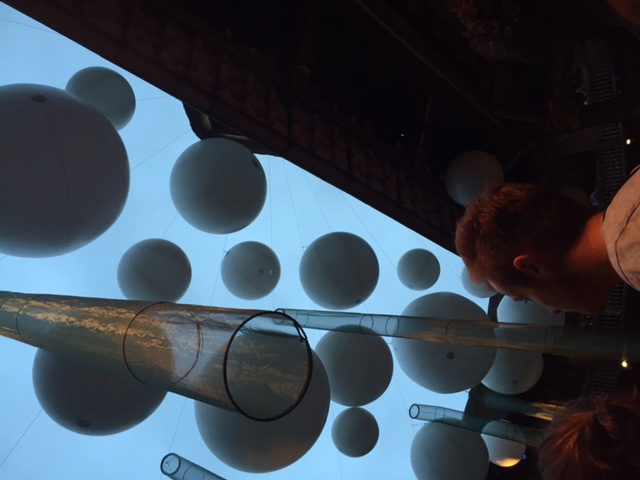 As I write this, my legs feel dead and I’m emotionally exhausted. Barely a week into my semester long acting program in London, I’ve already played the seven deadly sins with differing voices, imagined I was a raindrop against a windowpane and spoken my feelings to a coconut about a pomegranate I liked. Welcome to the theatre world. Since last Monday, I’ve been attending countless acting classes at the British American Drama Academy (BADA) in London, and I will be doing so until mid-December.

I’m currently staying in Kilburn, which is in Northwest London and has a wide array of cultures. Not every night is pub food and with the drinking age at 18, there’s much to see and drink. I share a flat with seven other BADA students from different colleges, rooming in a triple with two others. One of my flatmates is from Vassar, which can be very reassuring when you’re in a strange country.

My summer was spent in the Northern suburbs of Chicago, occupying my free time with voice and singing lessons and writing courses at Second City. My weekly commute into Old Town via the ‘L’ gave me glimpses of a city I’d always felt comfort in. Growing up, I’d attend Cubs and Sox games and play in Millennium Fountain often. So this transition to London, a city I’d visited once when I was 11, with history on every corner and a pub to match, was overwhelming, to say the least.

For the first time in my life, I’m providing my own food. No meal plan or parent. There’s a great amount of food around me, but with such strenuous days, most of my flatmates and I prefer to stay in. Some of them are cooking stir fry from scratch or using the kettle for tea. Just last night, my dinner consisted of a handful of Coco Pops (British version of Cocoa Krispies), some Ritz Crackers and a Jammy Dodger or two for dessert. As unhealthy as this diet seems, the walk to BADA’s classrooms is a good 50 minutes or so. The walk allows for a nice view of Regent’s Park, a place where a minute can’t pass without a dog approaching you and becoming your best friend. My flatmates and I have talked about taking the bus, but while we still have warmer weather, the walk is enjoyable enough.

If there’s one way to describe London, it’s the weather. You can always assume there’s going to be some rain during the day. It may be just a sprinkling, but there’s always rain. In fact, weather apps only show it’s raining when the rain’s actually going to be severe. I personally don’t mind it, however. While I don’t claim to be a Vassar Sadboy, my musical tastes do fall in line. And there’s no better environment to listen to mopey music than one surrounded by a grey sky, a medium wind and a light bit of rain. I’ve never been cheerier to listening to The Smiths, Nick Drake, Joni Mitchell, or Sufjan Stevens than now.

In terms of exploring the rest of the city, I have the convenience of living near three tube stops and an Overground station. One of the first days I was here, a couple of my flatmates and I went down to the river Thames to see London burning. The city wasn’t actually on fire, but 350 years ago it was and this was commemorating it with a few boats in flames. We also happened to be near Big Ben and the London Eye, so we, in typical tourist fashion, took some selfies and bought a few souvenirs. The whole time, everyone has been determined to fit into the town as a fellow Londoner. But that night we were tourists. Some of us have added British accents to words as well. I’ve often caught myself in the habit of ending conversations with “Cheers!”

We also took the opportunity of seeing a production of William Shakespeare’s A Midsummer Night’s Dream at the Globe Theater. As amazing an experience as it seemed, we saw the show as Groundlings. This meant that we got a great view of the stage, in fact we were right in front of it, but we were standing the whole time. Midsummer is usually a rather short play and most productions cut a scene or two, but this production spared no lines. It even added songs and a fair share of dance numbers, causing the show to be three hours long. During intermission, instead of going to the bathroom, I took the time to sit on the ground, sighing in relief, with my feet singing in the background.

Despite all of these touristy things, the greatest place we’ve been has been Camden Market. It’s only a ten minute walk from BADA’s offices, so when I get out of classes early, that’s the place to be. With countless shops to explore, they also have really good food. There’s a Gluten-free bakery, a cheap-yet-healthy sushi place, and an exotic candy store. I’m certain I’ll be returning there and I’ve already been three times in my first week. There was one bar there that had a drink called the Pornstar Martini, much better than the Purple Rain I’d had the night before, that tasted like an alcoholic strawberry orange juice. I’m not saying I’ve found my drink of choice, but it’s certainly in the running. There are also rare book stores and vintage clothing booths.

I currently am loving London. I miss my family in Chicago and especially my friends at Vassar. While I was fortunate enough to visit them before I left, distance plays a role. I can’t call a friend at 3 a.m. for help or join them for lunch at the Deece because of the time change. But what I do have are stories to tell when I get back. And, even with only a week, I have many stories to tell already. Cheers!