Though I’ve been in Bologna for almost three months, I’m still far from knowing all about this city. For example, after seeing a play, my friend and I got lost on our way home, took a random bus headed in the general direction we needed, and tried to find our way back to the center of town without any maps. I saw the white and black lights of Sephora like a beacon in the distance that led me home (pretty proud that my knowledge of where all Sephoras are finally paid off). Another example of my lack of knowledge of the city is how I stumbled upon the Terrazza Panoramica, a terrace at the top of the Basilica di San Petronio that is pretty much hidden except for a small sign at the back of the church that leads you through the gift shop and up an extremely rickety lift to a beautiful view of the city and the Appennini. My friend and I were both pretty sketched out by the whole situation until we got to the top of the church and found out that it was actually a thing.

I’ll have much more time to explore the city now that my class at the University of Bologna has ended. Lessons finished in the first week of March, giving me a month to study for the final exam that determines my entire course grade. My studying time has been interrupted by several trips (not the worst type of study break, so I’m totally fine with it) to Ravenna, Mantova, Ferrara and London. In Ravenna it was cold and rainy all day, so we were all pretty done with that trip once the guided tour ended even though the city’s mosaics were definitely worth seeing. Ravenna used to be a capital of the Roman Empire, so there’s a ton of pretty and important buildings there. It’s also in Romagna, which is where piadine (basically Italian pita bread) come from. Before leaving I had a piadina with pecorino and fig preserves, which was so good, and I should really be eating more of these instead of living off of tortellini tbh.

The trip to Mantova, a city in southern Lombardy, was for my urban history course, but even though the trip was for learning my favorite part was eating fried frogs. Apparently this is a thing in Mantova, so for lunch I decided to try it out and received a literal mountain of deep fried entire frogs. They tasted pretty similar to fish, and even though it was weird that they were still intact and I could see their feet and bones and stuff and had many questions about it (like how are frogs prepared for consumption? Does one peel frogs?), I definitely enjoyed that experience.

The trip to Ferrara was the following Sunday, and I’ve already decided that the castle and surrounding moat in the city will be my future home. 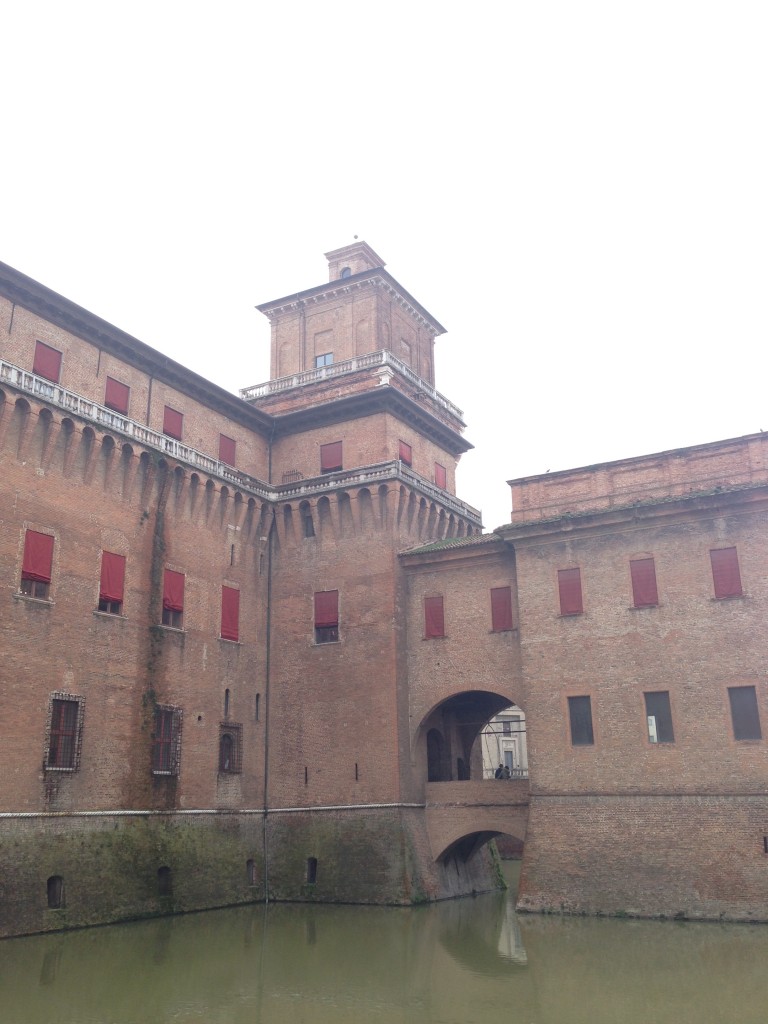 We had a huge lunch and a nice tour of the city despite the rainy weather, but our meeting with Giorgio Bassani’s daughter (Bassani is a famous Italian author who wrote about Ferrara a lot and whose 100th birthday just passed) was so long. Even our professors were trying to get out of there, but this woman just kept on talking for literally an hour and a half longer than the scheduled end time. She had sick electric blue eyeshadow though #goals.

I spent the weekend after midterms visiting a friend studying in London. My two main reasons for the trip were to 1) buy all the British makeup that Stansted would let me take on the flight back and 2) eat non-Italian food, i.e. poached eggs and spicy things. My first meal in London was eggs royale, which is eggs benedict with smoked salmon instead of Canadian bacon and now I know that there’s an actual word for that. Over the next few days I had Thai, Mexican, Ethiopian, and Indian food, all of which I greatly missed. I definitely love the food here in Bologna, but the options for non-Italian food are pretty scarce. There’s a good Chinese restaurant near me (and the owners know to bring me the vat of chili sauce when I sit down), but it was nice to have more than one non-Italian option for once. In between all this eating I also climbed the Monument (that spiral staircase almost killed me tbh), visited Camden Market and bought a ton of dark chocolate digestives.

I also visited the National Gallery with another friend abroad (Hi Bitsy), and we saw so many ridiculously famous paintings for FREE because admission to nearly all museums in London is free. Amazing.

She also took me to a pub for fish and chips, where I also ordered a side of gravy since I yearn for chips and gravy (I’m a Northerner I guess), but it’s not a thing in London so the gravy was basically au jus. Still got the general taste though. I also went to a rugby game, which was such a weird experience for me since I literally don’t know what sports are, but the park (arena? Pitch? Place with grass where the men fought each other over a ball?) had cider and fries so I didn’t mind that whole athleticism thing happening in the background. The most surprising thing about this trip, besides my mildly enjoying a sports game, was that everywhere I went I heard people speaking Italian. Maybe I’m just more sensitive to it now so I hear it more often, or maybe they’re all following me and I will never escape the Italian language who knows.

It was great getting out of Italy for the weekend, but being in London made me really happy that I’m studying in Bologna. Even though places like London have a lot more to do, Bologna is so much cheaper, practically free of tourists, and has an almost home-y feel to it that I don’t think I would experience studying abroad in a larger city like London. The huge student community here (100,000 students live in Bologna) definitely makes me feel more like I’m part of the community and not just some American studying here for a couple months even though that’s what I actually am shhh. Now maybe once I figure out how to not get lost in this city and buy a Napapijri coat people will think I actually live here all year round.