Time has been flying by at an unbelievable pace here at Oxford. Cold weather and clouds aside, Oxford has continued to prove to be an amazing adventure. Last time, I left off with my buddy Walter visiting me here, where we climbed to the top of University Church of St. Mary the Virgin, the highest point in Oxford. 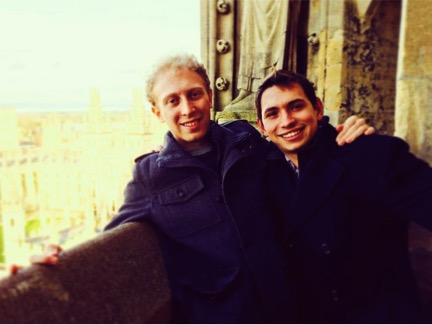 The tower offered awe-inspiring vistas of the University, including this view of All Souls College, home to the “hardest exam in the world.” (Guess they never took an Orgo 245 final!) 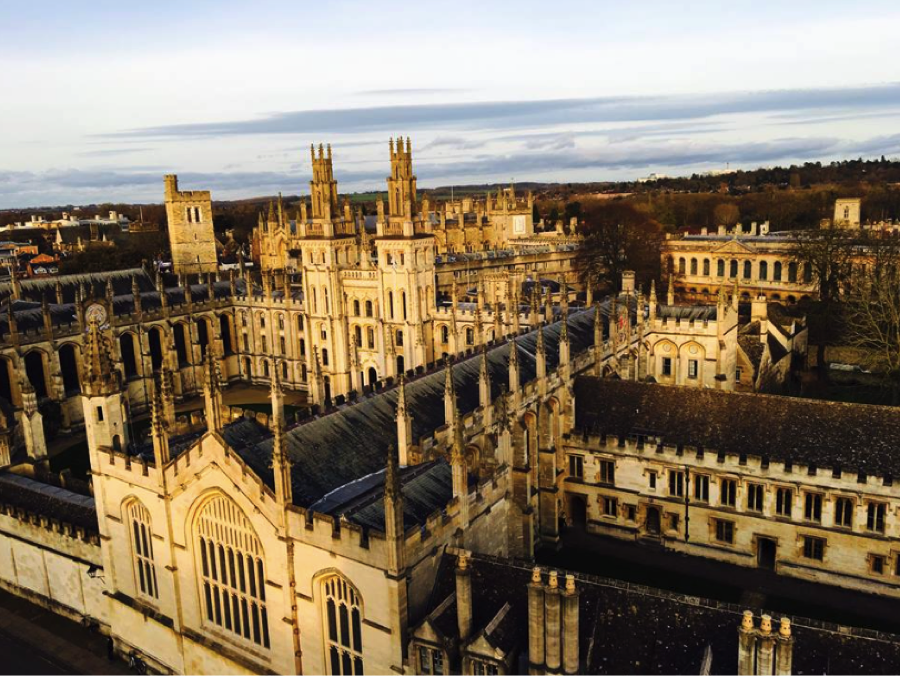 Exploring the University and the city has continued to be the best pastime and the most enjoyable part of my abroad journey. Right inside the gates of my college is the New College Chapel, which has the most beautiful wall I have ever seen, adorned with statues of many Saints and other influential figures in Christianity. When the lighting was right, I took a picture in front of it. 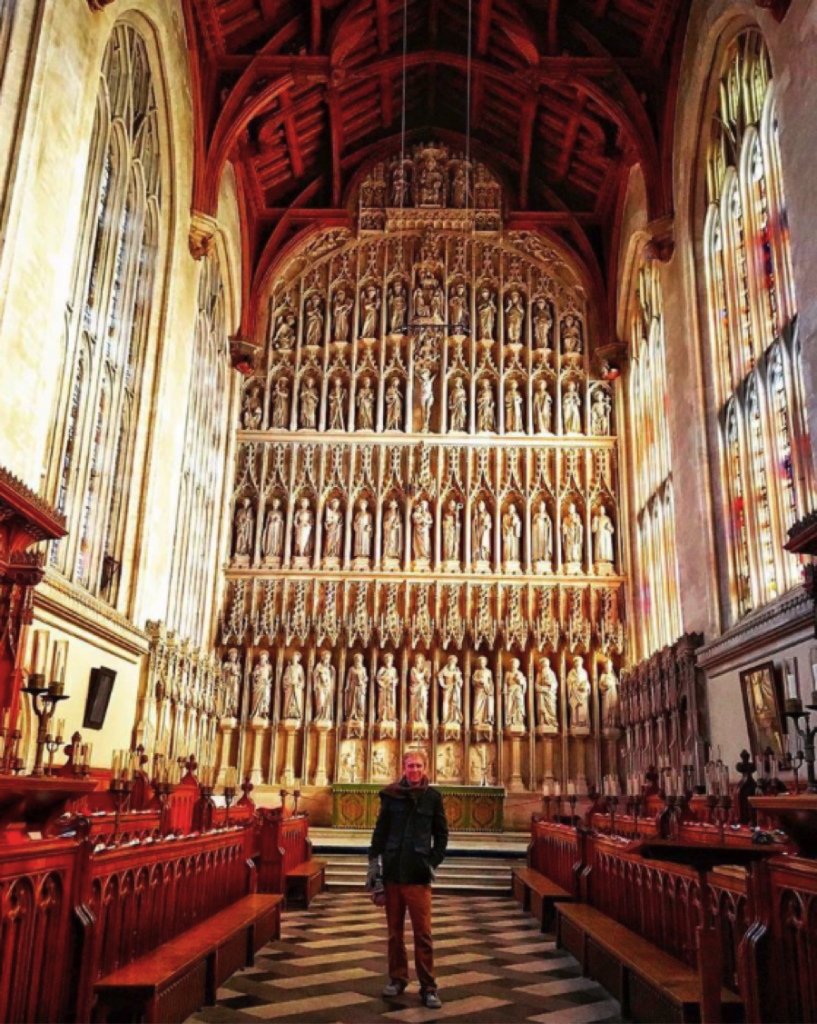 Whilst sunny days are few and far between here, we have enjoyed our fair share of beautiful weather. I try to take advantage of these rare occurrences and get out to explore more colleges. This is a photo of me in front of the dorms where I live. Somehow they manage to keep the grass 100% green no matter how cold it gets outside.

After going to see Guildenstern and Rosencratz are Dead at a theater in Keble College, I took a trek around and found my way into their astounding neo-gothic era Chapel, which contains the famous allegorical painting The Light of the World, by William Holman Hunt. I met an Organ Scholar who graduated from Keble College in 2005 who told me all about his exciting time after graduating Oxford as an orchestra conductor in Manhattan. He was kind enough to take a photo for me in the Chapel. 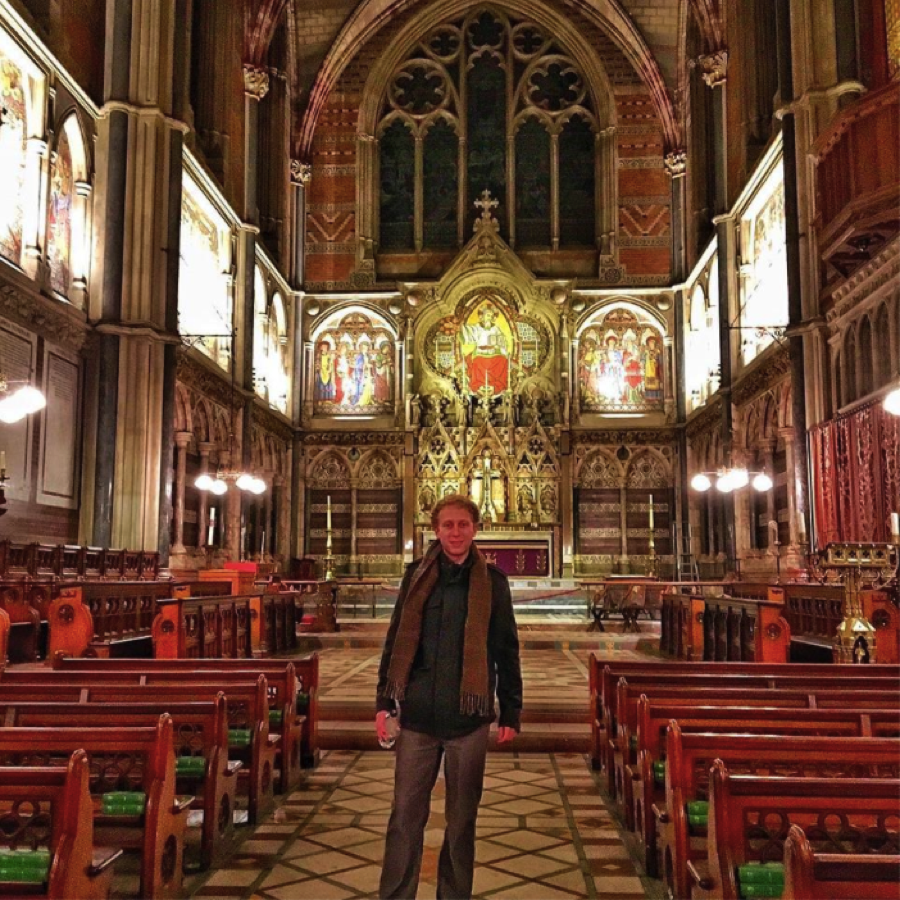 My college puts on many exciting events, including dances, pub nights, Quiz Bowls, and even a Blind Double Date charity fundraiser. My friend Wesley and I explored some fine Spanish cuisine (tapas and Sangria) with our awesome dates that we had never met before! 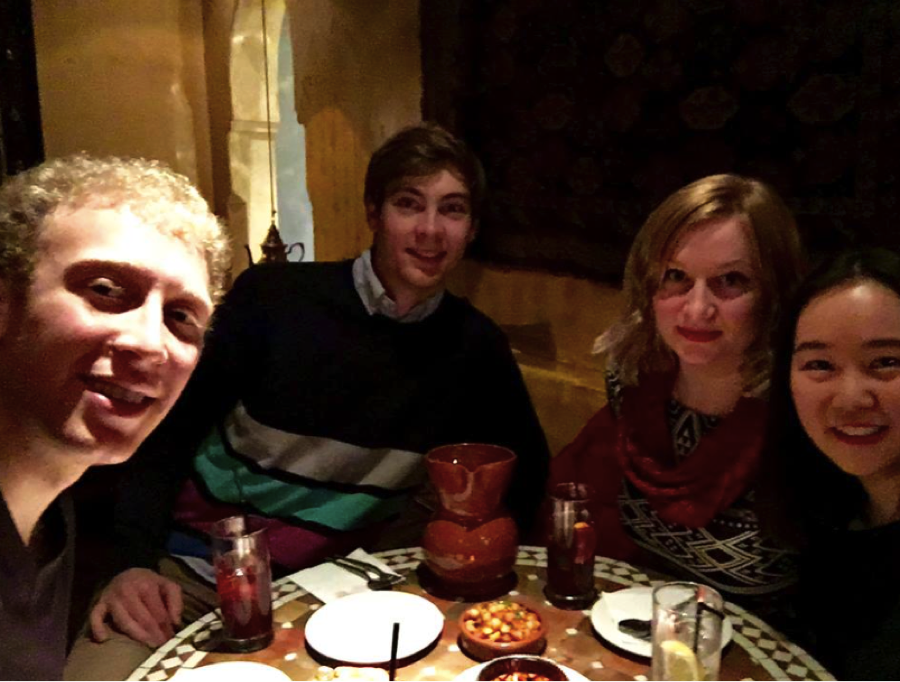 Kylie Prutisto-Chang, who’s studying in Glasgow, and Bian Zheng, who’s studying in Madrid, came to visit Oxford for a weekend. It was pretty great going to eat at Hall and having about nine Vassar students sitting around the table. It is true that we basically run this place. We took a trip down to London, where we visited the British Museum, the Tate Modern Art Museum, and took a ride on the London Eye. Here we are on the Waterloo Bridge overlooking the Thames River. 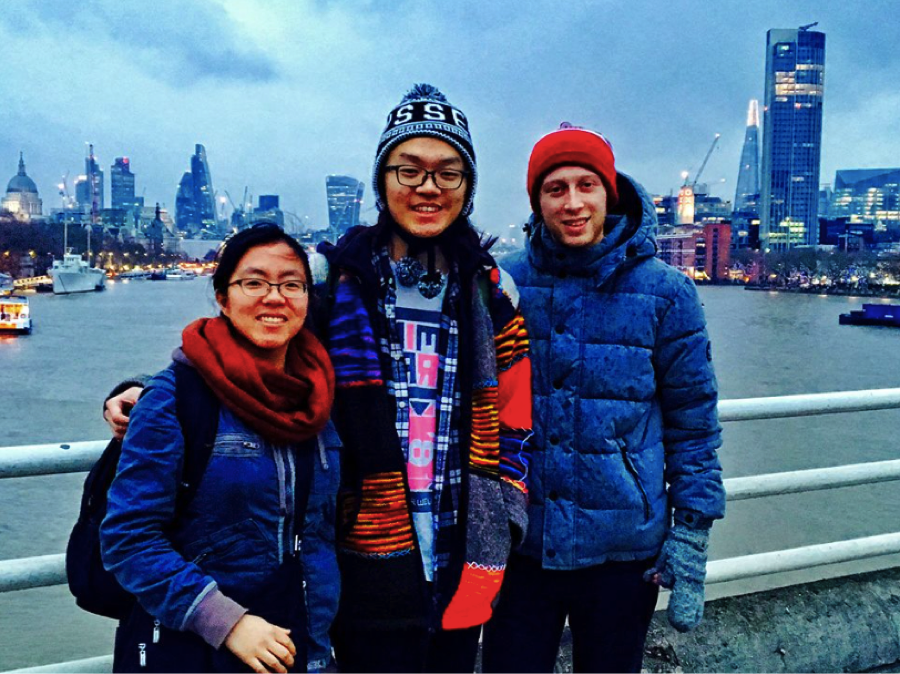 In my spare time (which I have a lot of), I love to participate in weekly lunch and learns put on by the Oxford JSoc, which is basically the equivalent of Hillel in the United States. We cover many thought-provoking topics over a plethora of delicious bagels (by UK standards, of course).

Possibly the biggest event to occur at Oxford since I have been here was #ELEVATE, where Shia LaBeouf spent 24 hours in an elevator and live streamed the whole event. Hundreds of students lined up for hours on end to get a chance to spend some time in the elevator with Shia; the only catch was that once you were in the elevator, you were allowed to spend as much time as you liked. This created a stressful experience where some people were spending upwards of 45 minutes with Shia, much to the dismay of others in line. It was exciting to see that while I was in the line, “Shia LaBeouf” was the #1 trending topic on Facebook–now that is a sign of a truly historic event. While I decided against spending the entire day in line (some people spent over 10 hours in line to see him), I did go to see him talk at the Oxford Union. This can be found on YouTube for anybody interested. My friends, however, did go in to spend time with Shia 23 hours and 50 minutes into the period, and got a shout-out for longtime Shia fan and Vassar student Gelsey White! 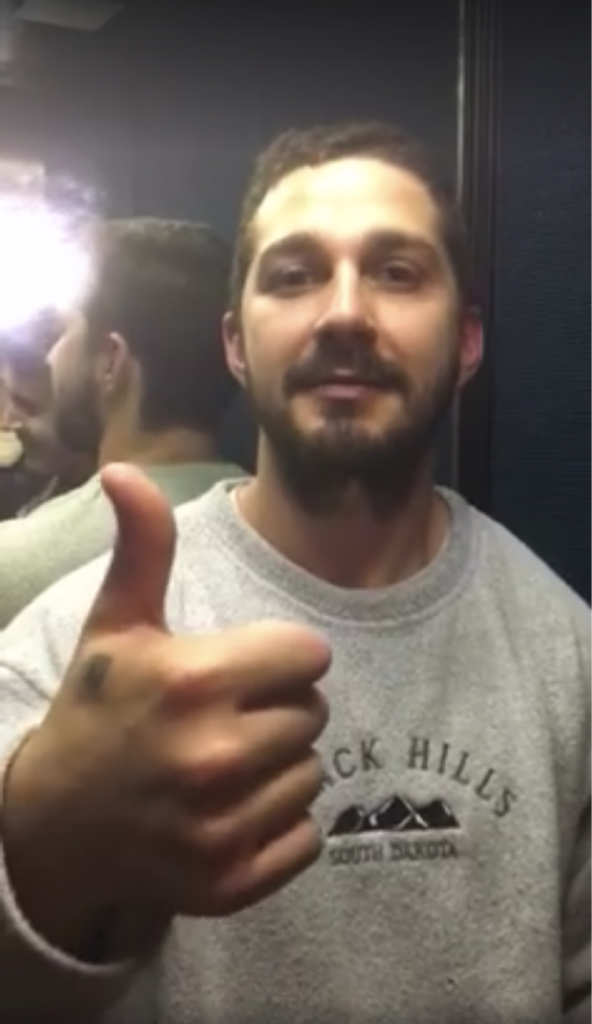 Also at the Oxford Union, I had the opportunity to see Janet Napolitano, former Governor of Arizona and Secretary of Homeland Security, speak about her views on the “Hedgehog and the Fox” in politics. While she was at one time considered to be one of the most likely to hold the title of the first female President of the United States, she is currently a candidate for the U.S. Supreme Court position vacated by the late Antonin Scalia. I asked whether she was interested in such a position, to which she responded that she “trusts the judgment of the Obama Administration.”

Now we are in March, and I cannot believe that it is almost time for my quite lengthy Spring Break. A lot of time has been spent trying to figure out plans for the vacation, and while I cannot disclose those quite yet, I am confident it will be quite an adventure. Flowers are blooming at Oxford, as you can see on this beautiful tree in front of the University Church. 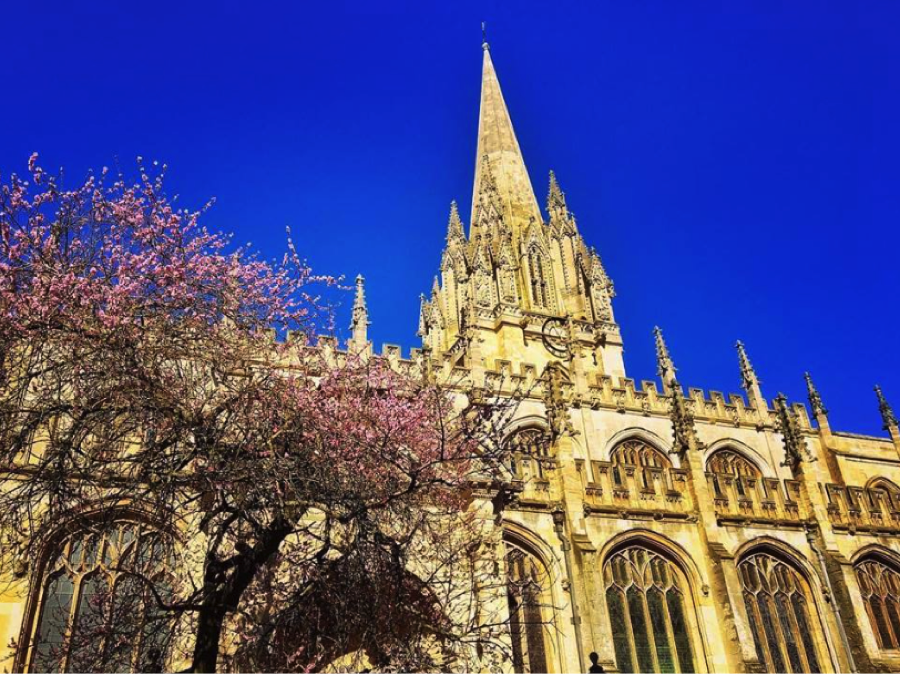 I am currently in Edinburgh, Scotland, where I am visiting my mate Walter at the University of Edinburgh. Although Edinburgh has similar vibes to Oxford, there are more opportunities to get out and do some much-needed hiking. Yesterday, we climbed Arthur’s Seat, “a hill for magnitude, and a mountain in virtue of its bold design.” It is located right in the center of Edinburgh and offers splendid views of the city. Here we are making our way to the top (in our matching Vassar beanies)!

We also saw Hollyrood Palace (the Queen’s official residence in Scotland), took a ghost tour, saw a production of King Lear, and spent some time in the National Museum of Scotland.

Can’t wait to see what excitement the next month brings!