My study abroad experience has been one for the history books thus far. From the very beginning, I have been dazzled by beautiful sights and powerful moments. The first happened right in the beginning when I got to watch the sunrise over the Atlantic Ocean on my flight to London.

Upon arriving in London, I made my way through customs and passed across the UK border. This was the first time I had ever stepped foot on foreign soil. Nothing felt any different whatsoever, and life went on as usual. My next step in my journey was to set myself up with the most critical thing a human being can posses…cell phone service. So I made my way to a vending machine that literally spits out SIM cards to stick in your phone. It’s amazing how such a tiny thing can have so much power. I soon left London Heathrow Airport (a little annoyed that the luggage people had ripped my brand new suitcase) and got on a train to downtown where I would meet my Vassar friend Michael Woods ‘17 (JYA at the London School of Economics) to spend the night.

This was the first thing I saw when I got off the subway. 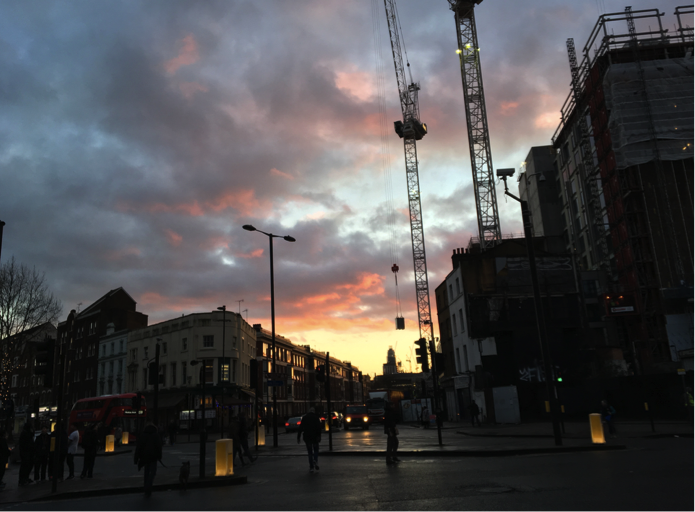 Sunsets actually look the same in other countries. The only difference is that people drive on the wrong side of the road here, and it took me over five minutes to garner the courage to cross my first street. I made my way to Michael’s flat and enjoyed the sunset view of the London skyline from his apartment balcony. Mama, I’ve made it. I would like to extend a special thanks to Michael for setting me up with the best accommodations for my first night abroad. Here we are in front of Big Ben.

We even took a nice night tour and got to see sites like Buckingham Palace (the Main Building of London). Long live the queen. #British

The following morning I made my journey to Oxford, which involved lugging my two huge suitcases through the London subway and walking more than a comfortable number of miles with them in hand. The English countryside is quite beautiful though, and filled with specks of white sheep. 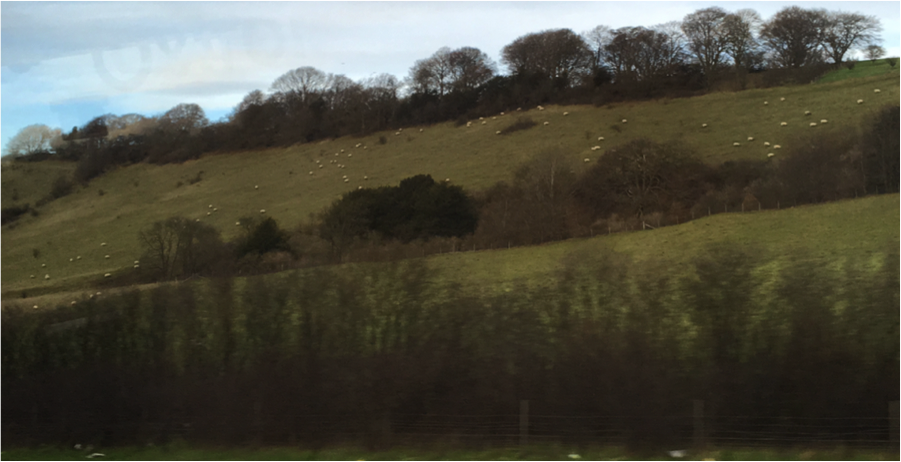 I finally arrived in Oxford, the “intellectual center of the world,” or so I hear.

It has old buildings. This one is Balliol College, photographed on my walk to my college, St. Catherine’s College. 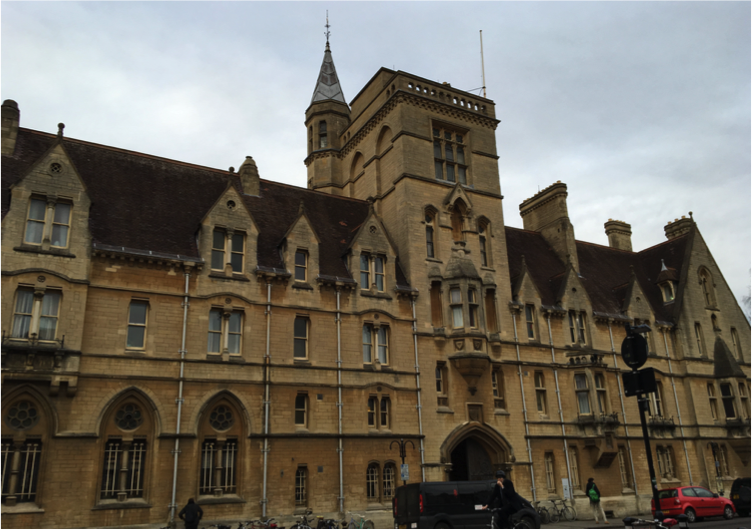 Oxford is broken up into 38 constituent colleges that comprise the university as a whole. Every student belongs to a particular college and calls it home. Our college is where we have our meals, study in the library and sleep. St. Catherine’s is the newest and largest college (by population) in Oxford. It has a modern 1960s vibe to it, and thus I have coined it the Noyes of Oxford. Apparently a very famous architect built it, but, like Noyes, it sticks out from the rest of the university like a sore thumb.

Fortunately, I don’t actually live in St. Catherine’s (Catz), as I was given the option to have a single room outside of Catz and was placed in New College. New, deceptively, was built in 1379 and is a true castle with at least one Harry Potter scene credit. Here is one part of the college. (The white shopping bag in the corner is mine.) 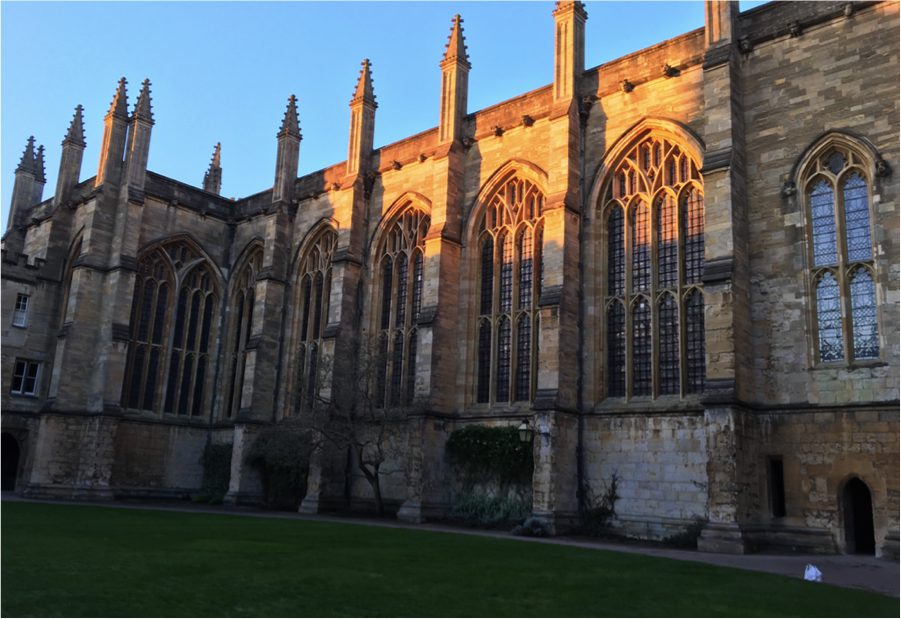 Unfortunately, I actually live in the peasant’s quarters outside of the castle, which I won’t show here for reasons of embarrassment and shame. All the St. Catz visiting students, of which there are maybe 50, had teatime with the administrators where we learned the ropes of being at Oxford (kind of). One thing I have learned is that, when in doubt, say “cheers.” When somebody says “cheers” to you, the only possible appropriate response is “cheers.” This can cause problems as sometimes you fall into a perpetual spiral of cheerful conversation from which it is impossible to emerge.

Oxford is a beautiful city; there is nowhere else in the world like it, and I would fight  anybody who would argue differently (Cambridge ain’t got nothing). Here is the Radcliffe Camera, part of Oxford’s Bodleian Library system and an iconic site in the city. (Note the casual scarf look.) 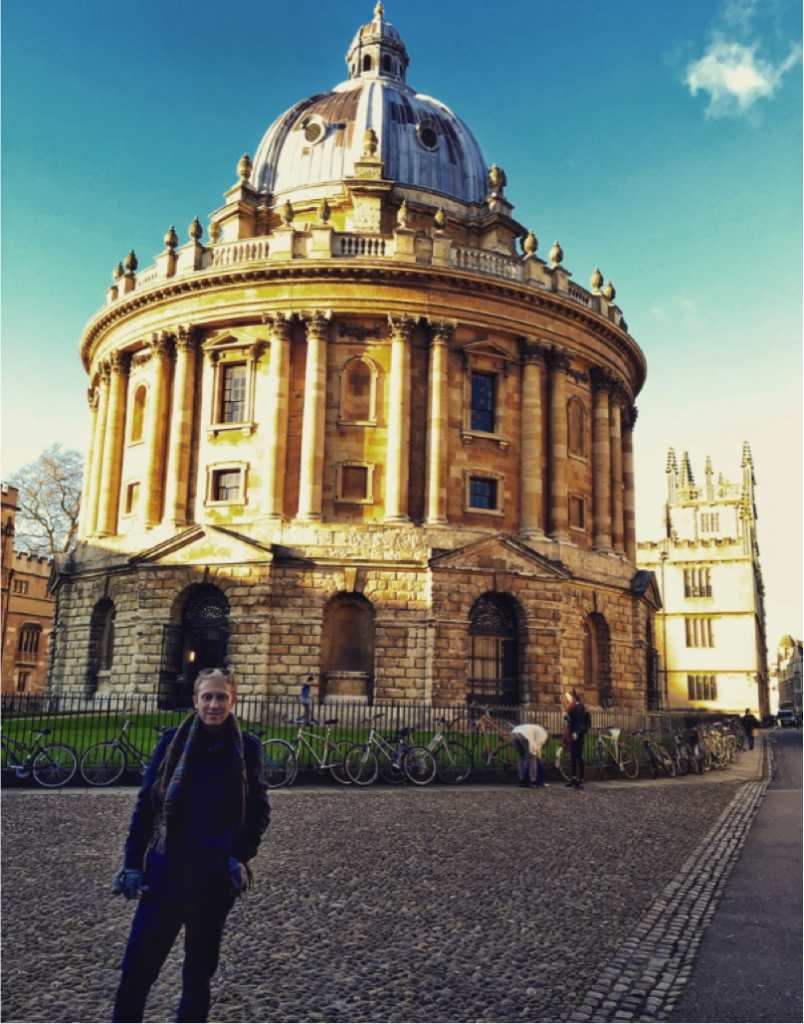 Being that Oxford is considered one of the most prestigious universities on Earth, it should come to no surprise that they actually have schoolwork here. However, it’s not really too bad, and I find myself with huge amounts of free time that I never enjoy at Vassar. Oxford uses the tutorial system—one-on-one class with tutors who are professionals in the subject you are studying. Tutorials are once a week for about an hour, and for each one you write an essay on the topic that will be reviewed and critiqued by the tutor. They range anywhere from six to ten or more pages. My two tutorials this term (which is called Hilary term) are evolutionary/medical genetics and immunology. In genetics, I have most recently been studying gene-culture co-evolution. My past topics have included: “Admixture events with archaic Homo species inferred from ancient and modern DNA,” “Archaic adaptive introgression in Humans” and “Population structure: Human races and Chimpanzees subspecies.” I just had my first immunology tutorial yesterday, in which I learned about macrophages, neutrophils and mast cells (if anybody cares). I find the topics to be quite fascinating, and I feel that I am learning more effectively than I would at Vassar.

I’ve made some great friends here at Oxford, and I have met some incredibly influential scholars at talks put on by the colleges and by Oxford’s Chabad and Jewish Society, which are both clubs that I have become quite involved in. There are so many events to attend here, but my favorite activity is always visiting new colleges. Everyone is unique and beautiful like no other. The dining halls are quite different from the Deece, to say the least.

I would like to extend a special shout-out to those who have become some of my closest friends at Oxford, the men colloquially known as the “Black Beanie Boys,” for reasons that will go unmentioned.

This is Oxford Chabad with Holocaust survivor Dr. Ben Helfgott, who went on to become the only known concentration camp survivor to have participated in the Olympics when he captained the British Olympic Weightlifting Team. 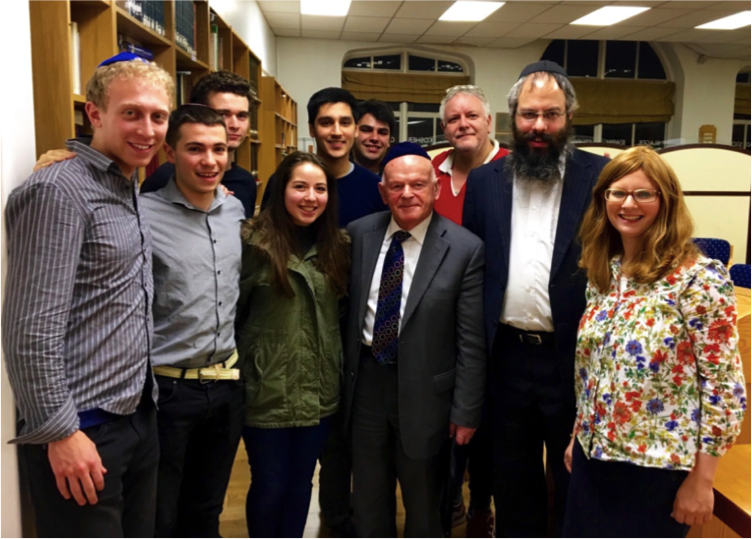 I even got a visit from my Vassar buddy Walter Gabriel ‘17 who came in from Edinburgh to see what this place was all about. We went to the top of University Church of St. Mary the Virgin and took some nice pictures.