It’s so hard to believe that I’ve officially been in London for 3 weeks!

I’ve moved into my own little flat, met around 53 new classmates (plus teachers and directors), started finding my way around my new school (London Academy of Music and Dramatic Arts- LAMDA) and explored amazing places around the city like Hampton Court and the Tower of London.

Some of my favorite outings have even just been walking around new areas, like Holborn, Hammersmith, Kensington and Notting Hill- where I live! (There’s an amazing market over the weekend on Portabello Road, about 10 minutes away from me, with tons of street vendors in addition to the usual shops and restaurants. I also live right behind a canal!)

Roughly half of the people in my program are staying at Chapter Portabello- a student residence in Notting Hill which is essentially an apartment building designed for students attending universities/conservatories/etc. Aside from having no dining hall and no communal bathrooms, Chapter Portabello is essentially a little dorm with study spaces, computers, a gym and a laundry room all on the ground floor. It’s about 30 minutes away from LAMDA.

Living in my own little apartment has also been such an adventure. There are so many little things that I’m not used to shopping for after two years of being at Vassar (plus 18 years before that living at home). My parents laughed pretty hard when I told them that I bought items like dishrags, toilet paper, and condiments for the first time. I’ve been sending them pictures of my meals almost every night because I’m so proud of myself for getting a handle on grocery shopping and planning meals. It can be a struggle when you get home exhausted at 6:30, at the earliest, so I rely on microwave meals from Marks and Spencer a lot, but I also cook large portions of pasta or stir fry on weekends to store in my fridge. (Marks and Spencer–M&S– is my go-to grocery store that I love love love and fully recommend. There are a ton scattered throughout the city. I go to the one near Notting Hill Gate, or the huge one in Hammersmith if I’m shopping after school.)

In my program, we move through nine different classes in small groups (stage combat, voice technique, acting, historical dance, singing, alexander technique, movement theatre, voice (dialect), and text) on Mondays, Wednesdays and Fridays. Then on Tuesdays and Thursdays, we go to a rehearsal space called the Diorama, and work on scenes with directors, in different, slightly larger groups. Right now, I’m playing the Dutchess of York and Elizabeth in a scene from Richard III. It took a little adjusting to get used to the fact that none of my classes repeat throughout the week, but now I really like the variety. Everything that we’re doing is very interconnected, so it’s nice to be able to study Shakespeare from so many different angles but still be able to connect everything that I’m learning at the end of the day. (For example, in singing class we’re looking at songs from roughly the same time period as our history plays are set in.) Some of my favorite classes are also surprisingly the ones that I have little to no experience in: who would’ve thought that I’d love practicing stage combat on Monday mornings, and learning new patterns in historical dance at 9 a.m. on Wednesdays? (Okay, I don’t love the “9 a.m.” part so much, but if I have to be in class that early, at least I get to wear a big flowy skirt.)

Looking back over the last three weeks, I’m just now realizing how everything has fallen into place. And yet, if you had told me that they would fall into place this time three weeks ago, I wouldn’t have believed you. Not for a minute. It was cold and rainy. I didn’t know a soul here. I had yogurt and crappy microwave lasagna in my fridge (I clearly hadn’t discovered M&S, my favorite store, yet), and I was extremely frustrated and confused by the fact that the sun goes down around 4:30 p.m. here and doesn’t rise until just before 8 a.m. Coming to a completely new place, all alone, has been the hardest thing I’ve ever done. But it’s also been the most rewarding. I’m literally building a life here from the ground up. I look around at my friends and can’t believe that I couldn’t remember their names a couple weeks ago. I catch myself getting lost in an exercise and think “remember how intimidating and scary you thought studying theatre at a renowned conservatory in London was going to be?” 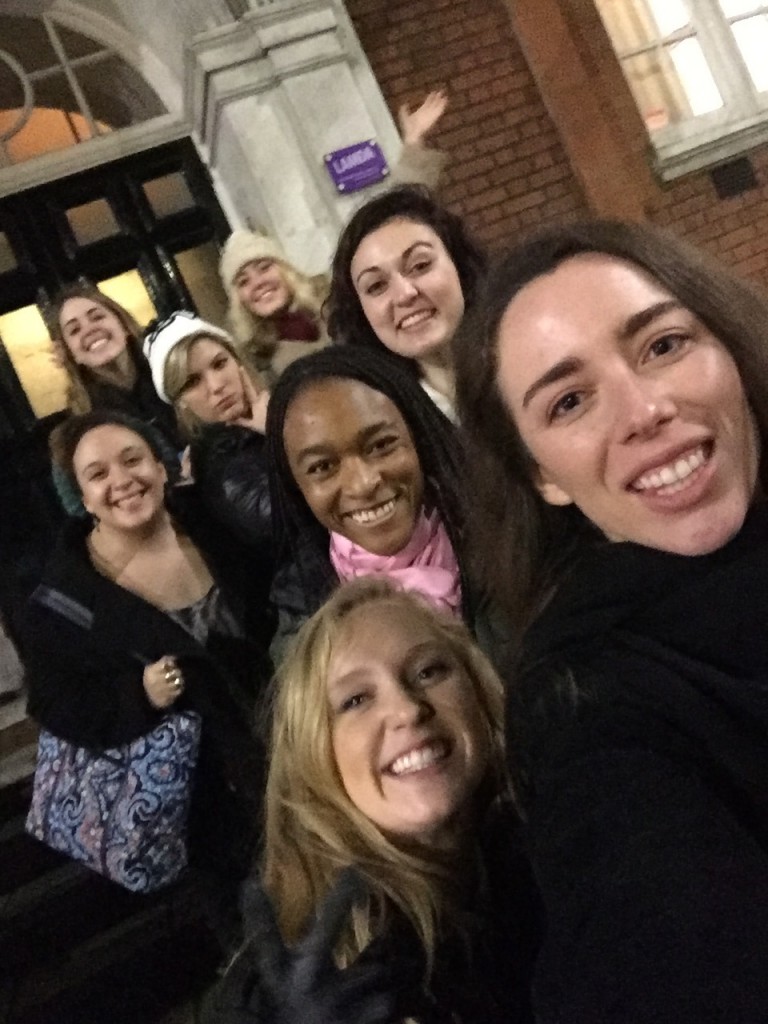 Please don’t think that I think I know everything, because I absolutely do NOT. Seriously. I’m still working on trying to understand why the sun goes down so early and rises so late. But I have learned a lot about myself, and done a lot of incredible things over the last three weeks. There’s still so much exploring to do, but my life is no longer “a million moving pieces”- as I frequently described it my first week or so here. As scary as it is to not have a routine down or know what’s what for a while, that “million moving pieces” phase is kind of unavoidable and necessary. There are so many things that no one can really prepare you for when going abroad, and I’m not going to act like a sage and list little pieces of wisdom for you here (maybe I’ll do that in future blog posts).

But for now I’ll leave you with this: saying yes to everything, not being too hard on myself and staying grateful/positive have been the three nicest things I’ve been able to do for myself. Yes, I’ll go on the “Jack the Ripper” tour even though I’ve been out every night this weekend and I’d usually stay in.  Yes, I’ll come to your birthday dinner even though I don’t know you that well. Yes, I’ll come to high tea on Saturday morning at 11 even though I’m exhausted from my first week of classes. By “not being too hard on myself” I mean that I’ve been giving myself more credit than I usually would for just showing up. I have a huge tendency to beat myself up for the smallest things, but when everything is new you have to give yourself credit for things like grocery shopping in under half an hour, or getting to bed before midnight. Because at the end of the day, no matter how overwhelmed I am by intense classes, balancing work and play, and trying to bond with everyone- I’m living by myself for the first time, in a new country, going to a new school, with great new friends, doing what I love all day long. That’s something to be really grateful for that can change my mood in a matter of seconds. 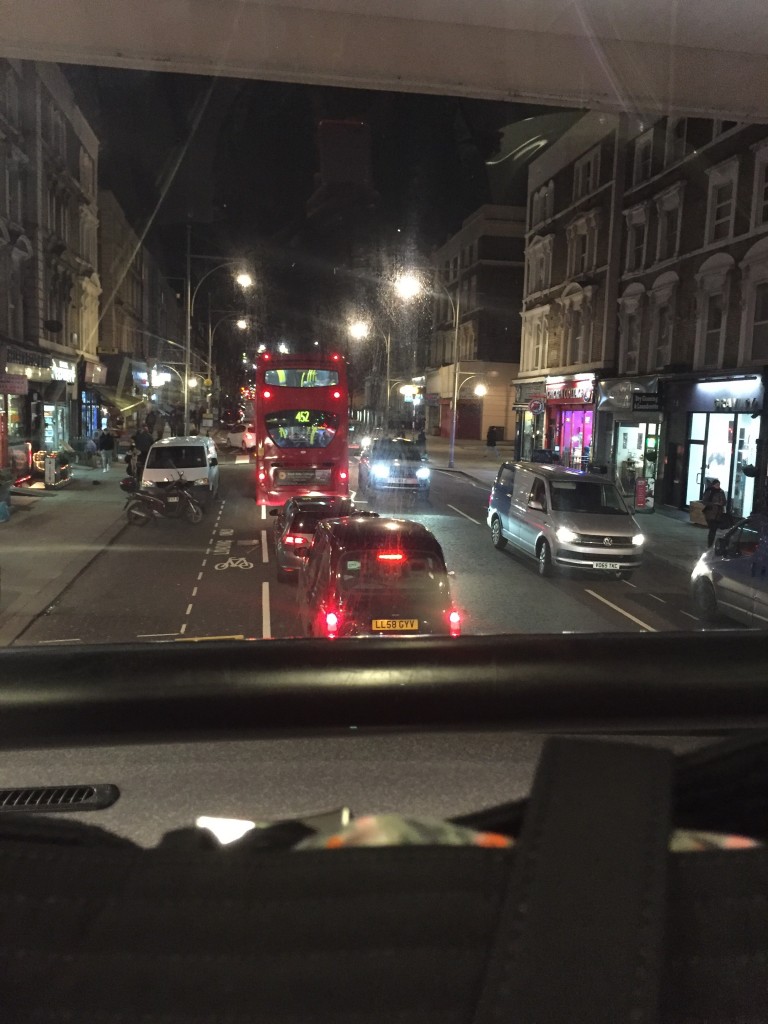