After a long flight and travel, we stumbled off the bus with our unruly luggage and filed through a short, narrow entrance between two buildings. Inside, a labyrinth of streets unfolded before us; blues, reds, and purples lined the walls, interrupted only by murals, tile fountains, and storefronts. We established our home base in Rabat, the capital city, with classes held at the Center for Cross Cultural Learning (CCCL) located in the Médina. Médinas are the old, walled-in cities and inside is an active, close-knit community of homes, shopkeepers, and food stands. Half of the experience has been getting lost, while the other has been discovering new sights while finding your way home. 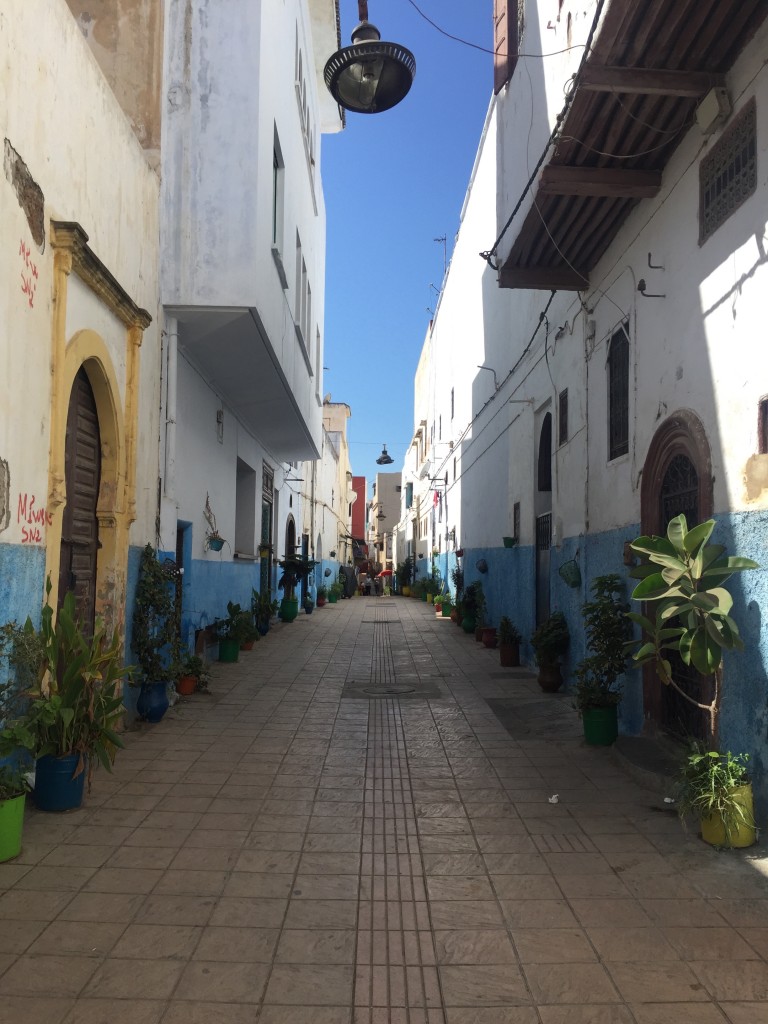 The lectures at the CCCL have focused on government structure, civil society and political protests such as the Arab Spring, water management, and the agriculture industry in Morocco. We tackled the role of neoliberalism and international trade on Morocco’s development. In particular, we discussed the necessity to preserve its precious water resources in the face of increased demand, drought, and desertification. 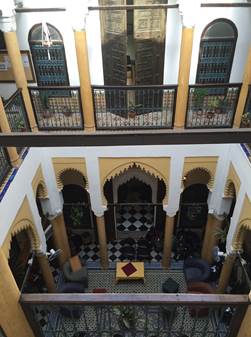 The highlight of my trip so far has been my homestay family with Addison ‘17. My parents, Assia and Khalid, live in the Medina close to CCCL with their two boys. They learned English from hosting abroad students for the past few years. Our little brother is beginning to learn – “goal” and “crazy boy” are his go-to phrases; I suspect past students taught him. In the house there is the standard mix of French and Arabic, with English added to fill in the gaps. I had begun to speak with Addison in Spanish to practice for Bolivia and on one of the first days, our host cousin came in and addressed us in Spanish. Coming from a single language household in the U.S., I was truly in awe at the mix of four languages bouncing around the dinner table.

Assia and I have had several conversations about social and political life in Morocco. I am impressed with her political involvement and recent move into local governance, with a dream of receiving a PhD. We spoke of the role of religion, gender, and the interplay of government and the monarchy. She told me how working for women’s rights and other marginalized communities has been her personal call into politics, and I shared how it mirrored my call to combat climate change. Khalid was the mastermind behind our daily tagine, a meal cooked in a clay pot on the stove and slathered with spices. The tagine is shared and informally split into “zones,” where bread as a vessel for food takes precedence over silverware. Each time we asked for a recipe, he replied with either “aunts” or “secret of the kitchen” and a sly grin.  They fostered an open environment where questions were encouraged, and I was happily challenged about my perceptions of Moroccan life, monarchy, and Islamic countries such as the changing gender roles and the personal preference that determines what women wear in public.

A class excursion was to Ben Smim in the Atlas Mountains for a week. After being in dispersed homestay families in cities for the past few weeks, we were happy to be living in close quarters while sharing open space and fresh air. The views were breathtaking, with rolling mountains and daily admiration of the sunset and stars. One night, a student led us in some sunset yoga as orange and purples bounced over hilltops and a crescent moon began to rise. It was a time where we all got closer as a group, let loose, and is among my most memorable experiences.

During our stay in this village, we saw the mechanized production of water bottles at a plant that had moved in to use a local water source. The next day, we met with a woman who was fired from the company and later led protests against the labor exploitation and the company backing out on their promises to employ and support the local community. She informed us how the water usage resulted in unreliable flow and blocked access to homes at higher altitudes. This has been a conflict, especially considering the agriculture dependence of this region. 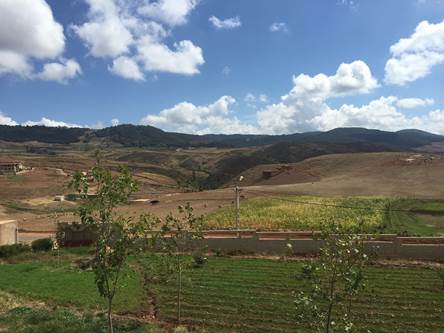 The next week we packed up and headed to Agadir, a town in the south of Morocco, that was rebuilt in the 60s after an earthquake. There, we enjoyed some nice weather and lectures on the Moroccan Green Plan, the fishing industry and labor unions, and the role of Morocco in international climate talks. We visited COPAG, an industrial farming cooperative, and observed firsthand the goals of the Green Plan to consolidate small farmers into cooperative structures to improve Morocco’s role in the international market. Next, we met with the former Moroccan delegate to the UN Framework Convention on Climate Change (UNFCC), he spoke of the hectic environment and alliance building with other North African countries that he’s experienced at past COPs. We then debated the role of multilateral agreements on climate change in contrast to a need for technological innovation.

We returned to Rabat for a night with a farewell dinner and party with our homestay families. A local band played traditional Moroccan music and we danced with families and staff, concluding our time with the CCCL. This marked the beginning of our week break, where students venture out on their own. Some have opted to WWOOF, a working arrangement on an organic farm near the Algerian border, while some other students and I chose Fes, a desert tour, and Asilah. I write to you all from the train to Fes, feeling torn between my desires to experience Morocco to fullest and my excitement for a new culture in Bolivia. Thanks for listening! I’ll have lots to report soon from our next lessons and locations.