We spent almost a week on Savai’i, the largest island in the Samoan archipelago, both relaxing in beach fales and learning about the island’s natural history. Savai’i is not densely populated at all: the island was only recently formed by volcanic activity, and the lava flows have not had time to break down into a soil that can be used for farming. Thus, there is very little arable land in Savai’i, and many people must move to ‘Upolu in order to make a living. This, however, does not mean that Savai’i is a marginal place in Samoan culture and history. In fact, this island is the setting for many Samoan myths and legends. I could tell that this island was different from the moment the ferry pulled into port. The ferry was massive- one of two that transports people twice a day to and from ‘Upolu. All to our left side, swells battered the black basalt shoreline, and the air was filled with wispy trails of water vapor, the sinuous remains of once-powerful waves.

After we disembarked, we were taken to our beach fales. I stayed with two other people from my program group, including my classmate, Royal Scales ’17! It’s been really cool to have another person from Vassar in the group. It’s weird, given the size of the school, the fact that we’re both social science majors, and the fact that we have a bunch of friends in common, that we hadn’t met before coming on this trip. But now, I have the pleasure of knowing her and sharing these amazing experiences with her.

Anyway, our fale was perched on a ridge of sand piled upon large sandbags. The ocean, made ravenous by climate change, gnaws at the dying beach. In the morning, I bought the first Diet Coke I had drunk in weeks, and walked out to the sea, seemingly asleep in the arms of a barrier reef. The combination of the receded tide, following the dark, endless pull of the restless moon, and the gentle flows of freshwater springs nestled beneath our feet, wrought what to me seemed to be the softest scars on earth. I walked in the bottoms of the rivulets, following them down the slope of the beach to the sea. I ambled in, dragging my feet through the brilliant sand. Later that day, when the evening sky begins its languid drip across the visual spectrum, I laid on my back, ambient sounds muffled in the warm water. All I could see was a great circle of sky, illuminated in all colors, clouds racing away from their mothers, the mountains and out to the unknowable moana. In that moment, I let go of my spatial orientation, wondering if that truest experience of disorientation would teach me what it was like to be built and rent apart by the wills of ocean and sky. I snapped out of this fancy, realizing that I could not let this hubris, this notion that I, as a human, was removed from the struggles of oceans and sky, influence my experiences. Little did I know that this same sort of hubris that would compel me to not wear bug spray and caused me to get Chikungunya.

Do NOT get Chikungunya.

After a few days of relaxation, we took a tour of the island, focusing on Savai’i’s natural history. We walked over thick flows of hardened lava, and our guide pointed out where locals have broken apart pieces of the surface for building material. On our drive, we saw entire churches, graves (Samoans bury their dead in front of their houses.), and gardens built from the ink-black rock. We went to a village ruined by an eruption that took place in the early 20th century, where the mossy skeleton of a Methodist church stands mired in the ropey rock. 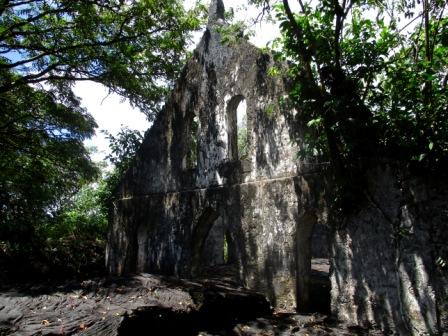 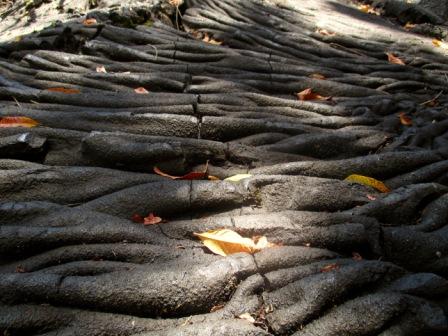 My favorite place, by far, was a cape at one of the remote ends of the island. It is a place where, according to indigenous beliefs, the souls of the dead entered the afterlife. Our guide refuted the tales I had earlier heard, and earlier told my friends and possibly put into this blog. For the incorrect information, I apologize. However, I like that story much more than the one he told me. What our guide told us was that the souls of the dead walked to this cape, shaped roughly like the number three, and waited on a ridge until sunset.

I scrambled across jagged rocks and ruined coral to get to this ridge. It was a roughly flat outcropping of basalt. I know nothing about souls, so I cannot evaluate how adequate of a resting place it is for them. I stood next to it, unable to climb to the top. I accepted it, leaving the best view to the resting souls. Then, I traced my steps back to the beach and climbed up to the most important rocks of the cape: the rocks from which the souls, split into groups of commoners and groups of chiefs, throw themselves into whirlpools that take them to their underworlds. Even though the sky was clear of storms, the water churned viciously a few meters below us. In some parts, the coral reef that stood between rock and ocean was shaped like a horseshoe. When the waves came in, water filled the void in the middle and was forced onto the shallowly submerged reef, giving the sea the appearance of breathing. 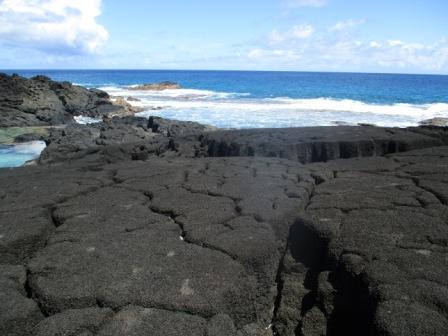 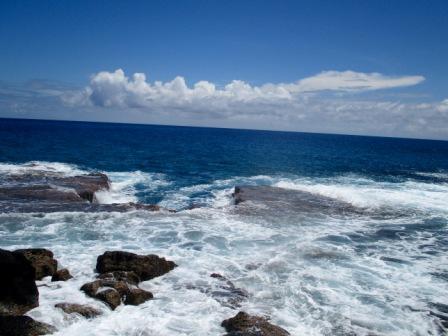 All the while, I was finishing up some cookies I had brought with me from our picnic lunch. I stood at the apex of the ridge, breathing in time with the sighs of the brilliant Pacific. I was munching on a cookie. When it was time to move on, I broke off half of my cookie and laid it on the ridge, hoping in the back of my mind that a soul should appreciate a last gift from this mortal world. It isn’t often that one eats cookies with the souls of the dead, so why not make the most of it and share with them?