It’s been nearly two weeks since I’ve arrived in Sāmoa. Already, things feel like they’re falling into place. I’m living at The University of the South Pacific-Alafua, located in a village in the outskirts of Apia. USP-Alafua is where the School of Agriculture is located. It’s a legit farm. I’ve never lived this close to cows in my entire life. They’re literally right next door to me. I haven’t explored the rest of campus, but there are apparently sheep, pigs, poultry, and crops of all kinds. The animals I most often see on campus, however, are stray cats and dogs. They’re quite friendly, but I try to avoid them as much as possible. Since USP is a regional university (It has campuses in places like Fiji and Vanuatu as well as here.) students come from all over the South Pacific- they’re from Sāmoa, Fiji, Tonga, Vanuatu, Tuvalu, and more countries!  All eight of us in my program group have roommates. Mine is Sāmoan, but she is unfortunately not at the university at the moment because she’s tending to family matters. However, this does not mean that I am lacking in new acquaintances from the Pacific Islands!

Recently, I was wearing my Vassar Rugby shirt while doing laundry. Our laundry is located near a house where a bunch of Fijian students live. Our group has become friends with many of the Fijians, and one of them said hello to me while he was on his way home. He commented on the fact that I was wearing a rugby shirt, and asked if I played. I told him I did, and he asked me if I wanted to join the informal games of touch rugby (there would be no tackling, thank God.) that take place every day after classes end. I was excited and terrified that he had asked me, and I accepted his offer. I need to keep up my skills and fitness for the spring season, but I knew that all of the people playing touch would be orders of magnitude faster and more skilled than I. In the Pacific Islands, rugby is incredibly popular, and most people who play have grown up playing and watching it. Adding to that is the fact that I would be playing with mostly men. I already detest drawing attention to myself, and the fact that I would be the only palagi woman rugby player would, in my mind, draw a bit of attention.

As soon as I stepped onto the pitch, however, all of my negative feelings dissipated. I didn’t know who anyone was, and I made innumerable mistakes, but I was playing again. The field overlooks my dormitory, and the mountain behind it. Below is a picture of the mountain in the morning, from right in front of my room. Not a bad view, isn’t it?

Well, imagine it during the sunset. We played until sundown, and then I hung out with some of the Fijians for a bit, since I already knew a few of them through my friends in the program group. They invited me to come to Fijian bible study with them. Although I do not identify with any religion in particular, I accepted the offer. It would be a learning experience for me. I quickly donned some fancier clothes and took a friend from the program group with me. It had been a long time since I had read or even handled a Bible, so I trusted on my friend of faith to help me out if I needed him. 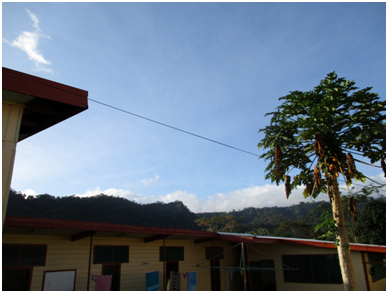 It turned out that one of the people I had played rugby with earlier that day was the deacon, the leader of the group! Many of those I had played with were there and were excited to see me. The fellowship began and it was super chill. However, the study was basically a speed-reading of the Bible, meaning that I would have to rack my lapsed-Catholic memory in order to remember where things were. At one point, the study group was told to find a verse about the perfection of God and I somehow ended up finding the passage about how Jesus’ apostles went into town to buy food. After stumbling through the Good Book, the service ended and we were asked to stay for some “light refreshments”.

Now, think of some light refreshments. What does the phrase bring to mind? Tea sandwiches and lemonade? Cookies? Tiny cubes of cheese with toothpicks in them? That’s at least what I envisioned. A member of the group brought around cups of mango juice. Already I was satisfied. Anything involving mango juice is good, I thought. Then came the surprise.

Plates of Fijian curry were presented to my friend and I. These were heaping, vibrantly colored servings of aromatic chicken and vegetables in curry, with rice on the side. This was literally more food and flavor than I could handle for one night. I managed to eat most of the curry before getting too full. I said goodnight to everyone and went home. This night among good company made me more confident about approaching other USP students, and made me feel like, maybe, I could make a few friends while I’m here.

Next week, I’ll begin my first of three homestays. This one takes me to Lotofaga (low-toh-FAHng-a) a village on the southeast coast of ‘Upolu. I’ll be living with a family for eight days. At best, my Sāmoan language skills are comparable to those of a toddler, but at least I may provide some sort of entertainment as I stumble through this rich and beautiful language. I’m excited to see a new part of ‘Upolu and live with a family. If anything, it will be a new experience. I await the Sunday meal, the to’ona’i, with great anticipation. We’re talking about baked coconut cream with seasoning (palusami), divinely seasoned octopus, and breadfruit and taro  f o r  d a y s.  I’ll write again when I wake up from this tryptophan frenzy or when I get a good internet connection again.