This semester, I am studying with 25 students on SIT’s IHP Climate Change: The Politics of Food, Water, and Energy. We travel to San Francisco, Vietnam, Morocco, and Bolivia. I have several goals for the semester. First, I want to learn how to live out of a suitcase, while shedding some attachment to material items and 3G Internet connection. Second, I want to push myself out of my comfort zone for the sake of personal growth. Finally, I aim to learn from my fellow students, faculty, and from experiential learning abroad.

Like many students, I haven’t had a similar experience or even been to 3/4 of these continents. On the first day, the group was faced with the realities of our choice – a session on privilege and an anti-oppression workshop. Much of it was a continuation of social justice discourse at Vassar, but I was comforted to hear the other students engage and provide their perspectives. Among my biggest takeaways was the fallacy of students from the U.S. becoming “global citizens” from a semester abroad and the harm in commodification of culture or objectification through photography. Our classroom was in a local activist space in the Mission district of San Francisco, which gave us a framework to recognize that that this learning would be an ongoing process as we travelled.

Among our first stops was a trip to the Driscoll’s distribution center in Watsonville, California. We learned about their business model of providing research and development, seeds, and other services while contracting out smaller farmers throughout the world. We got a run down of their global operations, the process of freezing berries with a chilling tour through an industrial freezer, and the quality control to get the homogenous fruit we consume in the super market. It put into perspective the effort, and particularly the carbon, required to enjoy seasonal fruits 365 days a year.

After, we stopped to eat a packed lunch in Natural Bridges State Beach, and I got to enjoy my first visit to the Pacific up close and personal. After climbing rocks, getting our feet wet, and relaxing for a bit, we headed to Swanton Berry Farms about an hour north in Davenport.

We walked into a small building where the sign above the counter read “Don’t panic everything’s organic.” The blackberry cheesecake called my name behind the glass refrigerator door, but I treated myself to coffee as I rushed into my seat as Jim, the owner, began to speak. His hair shone an ivory white and he rested his crossed arms atop his protruding belly. He told us the effect that recent climate change and the drought in California had on his crop yields. 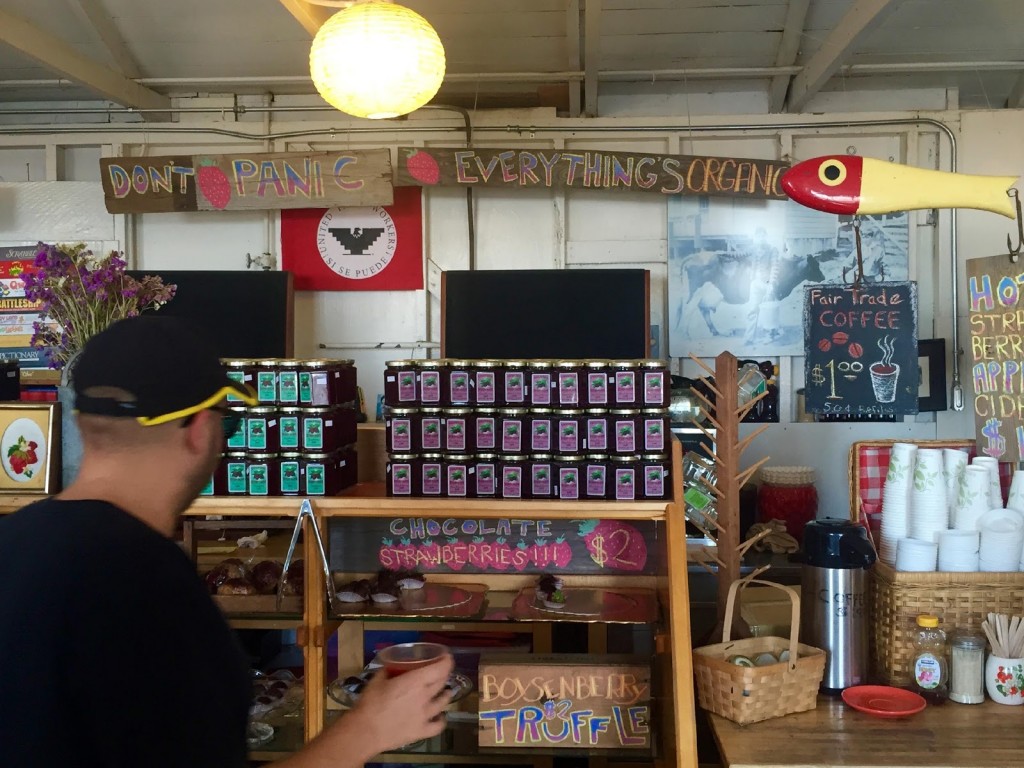 After some questions and discussion, the group departed to visit one of the berry fields. As we left, he called to two classmates and I to skip the bus and we had the privilege of Jim as our personal escort to the farm. The car whipped along Highway 1, bordered by the Pacific and rolling hills. I wondered how Northern California had preserved its waterfront views for farmlands and avoided the luxury developments that would seal off its horizons, a sight I was not used to back home. Jim told us he gave up his childhood dream of being a physicist to become one of the first USDA certified organic strawberry farmers in California.

We reached the ranch and the bus pulled in behind us, classmates poured out to share the view. Strawberries grew in horizontal rows down to the highway, and the ocean remained in sight. The sun bronzed our foreheads as we snaked along rows of strawberries picking the biggest and brightest we could find. 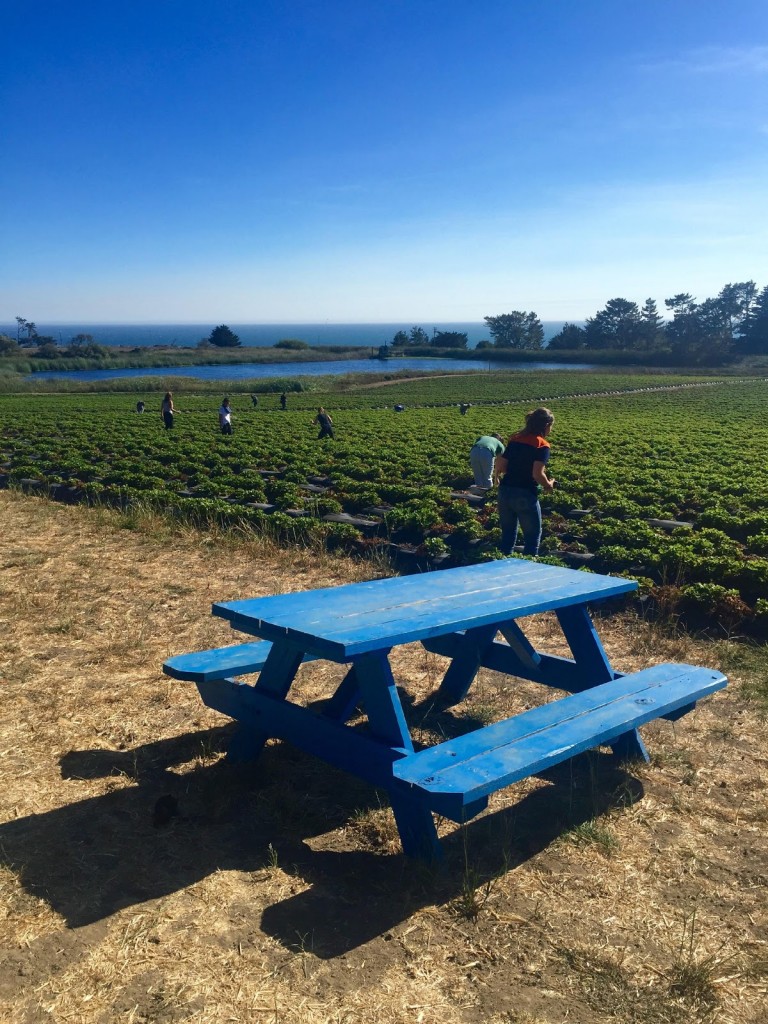 On the bus ride back to our hostel, I reflected on the stark contrast between the mechanized distribution at Driscoll’s with the individuals at Swanton Berry working behind the scenes, providing the world with the products we find on our grocery store shelves. Classes in sustainability and food politics had provided me with the framework to analyze the methods, but the classroom just couldn’t offer the same kind of insight I got from seeing this myself.

For the next week and a half we were busy exploring San Francisco, attending lectures, and making site visits. Many speakers were local professors or professionals, speaking about topics ranging from Vietnamese history, climate science and policy, and the oil industry in the U.S. One lecture that really stood out to me was an Introduction to Fracking given by Madeline Stanos, an attorney for the Center on Race, Poverty, and the Environment. She told us the realities of the water usage used for fracking and agriculture in California, with a highly disproportionate impact compared to residential consumption that the news emphasizes. She told us how there are currently no setback laws prohibiting the placement of oil wells, leaving populations and even schools within a harmful distance. The effects of this exposure are a strong smell, dizziness and headaches, nosebleeds, and threat to contaminate local waterways. Unfortunately, these fracking wells are often placed in the most economically disadvantaged communities. She is litigating a case against Gov. Jerry Brown on behalf of a family whose daughter goes to a school with a fracking well in sight of the playground, and high incidents of terminal illness and death at the school.

Another fascinating lecture was by a Navajo woman, Wahleah Johns of the Black Mesa Water Coalition. She shed light on her decade-long fight to combat Peabody Energy’s coal mining operations on top of the reservation’s water source. She organized among the tribes to limit the company’s water usage, which successfully closed down a mine. Most recently, she has been campaigning for a Just Transition – to build a large-scale community solar development that would provide clean energy to those dependent on coal as well as the large population on her reservation without electricity. I was moved by her beliefs in the connection of nature and all objects as living, as well as the importance of recognizing ancestral lands.

Environmental work is always an uphill battle, and on the first day I admitted to my classmates my fear of becoming too disheartened to continue the fight. The lectures have given me role models, while San Francisco has inspired me by its activist community and proximity to breathtaking nature. My classmates already tease me for saying “wow” too often. With my word limit approaching, I leave you with some of my favorite sights along the way – street art in the Mission and Clarion Alley and a hike to Land’s End. Next time you hear from me I’ll have lots to report from Vietnam.