I’ve come to my last blog post and realize that I’ve had yet to post about the beautiful city, which I’ve lived in these past four months. Roma, Italy is a place I’ve grown to love, not for the wonderful historical and tourist-heavy opportunities it promises, but for its God-awful bus service, businesses that are never open between the hours of 12pm-3pm, crazy Italians, crazy Americans, aggressive selfie-stick vendors, and the food. The food the food the food.

I won’t lie, having pizza and pasta for just about every meal, every day of the week, takes its toll on a person; I do not think I will be having Italian food for a very long time, though I will miss pizza al taglio (pizza by the cut), where they use scissors to cut your desired piece, and you pay by weight. I don’t think I’ll be able to enjoy American (or Filipino) pizza to quite the same extent again.

Just to give a brief overview of the program I’m on for the budding classics majors out there (get out while you still have a chance at a career): the Intercollegiate Center for Classical Studies is an all inclusive academic package designed to fully integrate the young historian with various rock piles and funerary inscriptions. You, and about 30-35 other students from universities around the U.S.A., are crammed together in one ex-nunnery where you sleep, eat, and work as a happy little unit. You spend most of your class life on-site (or in the Library); all the City Course lectures and most of the Art History ones are in front of, or in, the monuments/buildings/pieces your teacher or professor are telling you about. It is actually rather fantastic, though exhausting. You do, however, learn how to write standing up pretty quickly and/or which sections of ancient monument you’re allowed to reasonably perch on.

As for living in Rome itself…I could never have picked a better place to spend my semester abroad. Sure, nothing works here, but I also grew up in the Philippines, and the fact that I can actually use public transportation without worrying about anything other than the fact that there may be a strike again, is huge. As long as you go into situations with an open mind and a good sense of humor, then you will be fine. The Italians do not disappoint on the entertainment front.

I was on the 75 heading down from the Gianicolo (largest hill in Rome — I live right at the very top) and the bus lurched to a crashing stop. I watched in shock as the lady standing at the back of the bus made good, solid contact with the windshield; a puppy literally went flying into my chest (best surprise ever); somebody’s shopping bag attacked the shell-shocked passengers with a barrage of fresh fruit; and a carton of ACE juice – the most genius invention yet – successfully knocked the glasses right off of my friend. 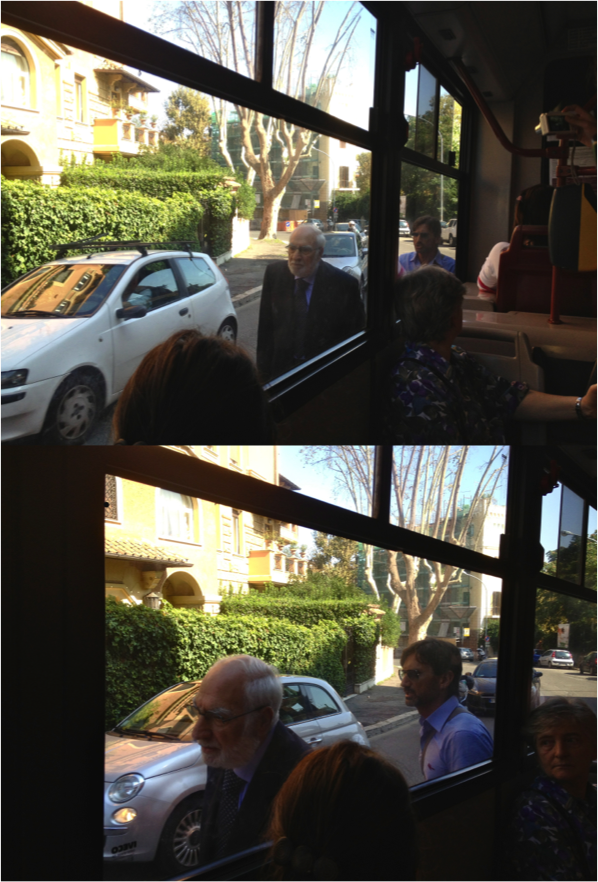 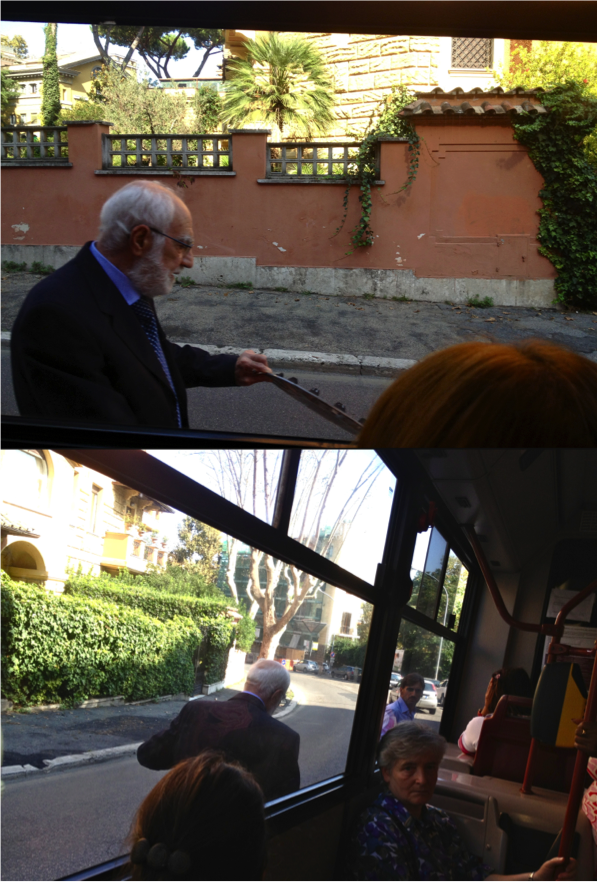 After these two or three seconds of complete chaos, we heard a round of cursing coming from the driver’s seat. He threw open the door and soon, bits and pieces of the story begin presenting itself. An old man had, I think, been trying to pull out of his parallel parking slot on the downhill curve of the road, just as the bus was barreling around the turn — oh yes, Italians drive and park horribly. I couldn’t quite get all of what they were yelling, but I did get to watch gleefully as our bus driver began to chase the old man around our bus, while the old man stomped around waving his hubcap in our driver’s face. They eventually changed directions and the old man started chasing our driver around our bus. We didn’t really get it. The Italians on the bus were less amused, though, because they had a very busy schedule to uphold and if this bus screwed with their naptime, there would be definite hell to pay.

This almost compares to the other time on the bus when I watched a small child puke all over their father. Or when a couple got into an intense marital spat and got off at different stops.

Italian public transportation is full of little gems if you look out for them, but don’t expect anything reliable because it will fail you in that respect. Generally, once you’re on the bus, you’re going to get where you want to go — considering it hasn’t down-poured and ruined the route, or the bus doesn’t break down. Also, expect moments where you wait about 20-30 minutes for a bus, then have all four of the buses running on that line, in that direction, show up at the same time. Or when they don’t show up at all because of some strike or another.

I could go on about the monuments, the gorgeous churches, or the fascinating ruins, but those you can read about in a guidebook. Ancient Rome seems to be just a part of the city, built into the daily routine of any Italian living here. If anything, it gets to be such a nuisance. I knew I was jaded when I was stuck in traffic, in a bus, trying to get to class, and thought to myself, “somebody needs to move this damned monument.” It was the Colosseum. The traffic surrounding that monstrosity is absolutely ridiculous. Regardless, monuments and public transportation have not been the defining moments of my experience.

Some of the highlights of my time in Roma have been the nights out with my friends in Trastevere. The nightlife here is incredible; it’s unlike anything I’ve ever experienced before, either in college, or back at home. Here, the Romans generally have aperativo (pre-dinner drinks and snacks) at around 6:30 or so, then dinner at 8:30. It’s only sometime after dinner that they make their way over to the bars, and by about midnight, things are filling up.

Now, I don’t believe it is illegal to drink in public, as everybody spills out onto the streets. The night scene isn’t localized in one area, at least not in Trastevere. Everybody hangs out in a piazza, or the streets outside of the bar, or a big set of stairs (normally those ones are just high schoolers who think they’re being cool). Sure, there are a lot of American-oriented bars (G-Bar. Hah). for the hundreds upon hundreds of study abroad students (see: Temple, John Cabot, American University of Rome, some UCalifornia program, Kenyon in Rome, etc. etc.), but just stay away from Campo (de’ Fiori) and the Piazza Navona area, and you’ve eliminated a good chunk of them.

I know this isn’t a very well written blog post, and I am sure that I will read it and cringe, but I’m writing this at a time when I’m getting ready to leave. It’s been a tough few months, and looking back at the time I’ve spent here, the flashbacks aren’t entirely coherent or well organized. The traveling I’ve been able to do, the things I’ve been able to see— all of these memories are tangled with stress, joy, frustration, giddiness, wonder, exhaustion, excitement, and disbelief. Disbelief at this opportunity, disbelief at the remnants of history, disbelief at how quickly time has passed.

Coming to know what I know about this city the way I have, which is by no means anywhere near exhaustive, will stay with me forever. I will never forget this experience; I will never forget Rome. So here’s where I leave you with a collection of photos in no particular order that, I hope, will give the sense of Roman grandeur that I have not properly been able to communicate.