For starters, my parents came to Madrid to visit me about two weeks ago. They had just finished a bike trip around Cataluña, the northwestern autonomous region home to Barcelona. We spent the half-week they were here in Spain running from museum to museum (El Museo del Prado and The Thyssen), walking from end to end of Madrid despite my repeated pleas for a taxi, and eating delicious food that was definitely well out of my daily 11 Euro food budget provided by the VC Program. [Word to the aspiring JYAer: jump at any opportunity to be wined and dined by visiting parents!]  Not only was it great to see my family because I was starting to get homesick and miss them a bit, but it was also great to get away from my home-stay for a few nights for a change. It’s not that I don’t love my host parents, but it’s always a breath of fresh air to get out of the apartment for a few nights and, if anything, it just made me appreciate Tata and Joaquin all the more when my mini stay-cation in my parents’ hotel room was over.

Amidst all the one-on-two time with my parents I somehow squeezed in between classes, we still managed to have dinner with my host family twice. The first time we went out to dinner at a local tapas bar after first having some wine and antipasto at my host family’s apartment. It was quite an experience to see my real parents sitting down across the table from the two people I’ve come to call family over these past months. To be honest, I was pretty nervous about it at first because neither my real nor host parents are bilingual, so I was expecting to be saddled with the task of playing translator all night—a feat I am far from capable of doing easily—, but Jesús, my 30 year-old host brother who speaks perfect English was able to come along and act as the interpreter for a greater part of the meal. Overall, I couldn’t have asked for a better night out. After hitting it off so well with my parents, my host family invited us over for dinner the following evening. Tata pulled out all the stops, providing my parents with an authentic Spanish feast, complete with gazpacho, chorizo, pimientos de padrón, tortilla española, and pan-seared pork chops, all topped off with a hazelnut ice cream cake, which is a striking contrast to the small cup of cold soup that Tata and Joaquin eat nightly to avoid la indigestión.

When it was time to say goodbye to my parents after about half a week, I was sad to see them go, but I was quickly distracted by the upcoming round of midterms that, after having loomed overhead for a month or so, had begun to encroach at an alarmingly accelerated rate. It’s not that the workload at Carlos III University is particularly large or worlds more challenging than that of Vassar or Wesleyan, but rather that the majority of us have not studied or done any significant amount of work since finals last semester so we’re all a bit out of practice as far as diligent work is concerned. Moreover, the fact that many of the guidelines and expectations for my assignments are given to me in Spanish is particularly stressful because there’s always the very real possibility that I’ll misunderstand or mishear the directions being provided. A perfect example of this occurred when my teachers said, “I expect that you all have these two books read by next week, we have an in-class paper on it,” which I interpreted as “I hope you enjoyed these books, there might be a take-home project due at the end of the semester on these.” 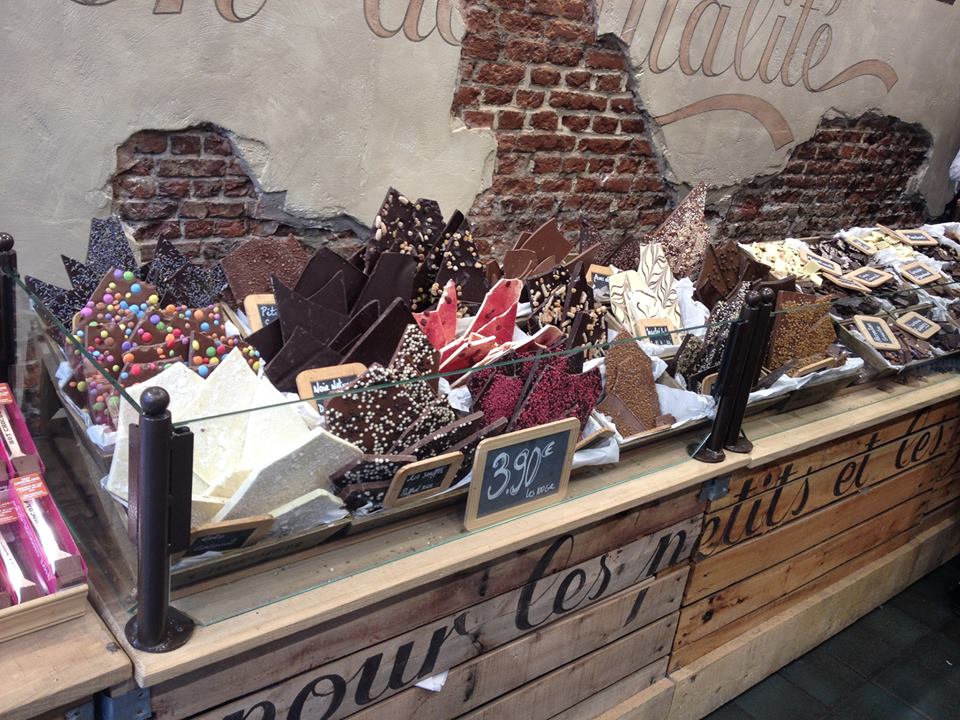 Overall, my midterms seem to be pretty evenly divided over the next several weeks, which is definitely a godsend considering that I’ve planned to begin traveling around Europe during the next couple of weekends. In fact, I’m writing this on a return flight from Brussels back to Madrid. My travel companions, Molly and Sybil, and I managed to squeeze a ridiculous amount of food, beer, and sightseeing into two days. We started off Friday morning with a tour of the Atomium tower, a gigantic remnant from Brussels’s World Fair that provides visitors with a bird’s-eye-view of the city, which was promptly followed by our first Belgian waffle, which put every other waffle I’ve ever tasted to shame, and then, after a great lunch at a French-Beligan restaurante, we went on a beer tour—a much anticipated overview of the divinity that is known as Belgian beer. Our tour guide Berber led us from bar to bar explaining the differences between various types of brews as we sampled a bit of everything. Our favorite was the Kriek, a variety of cherry ale that would please even the pickiest of connoisseurs. 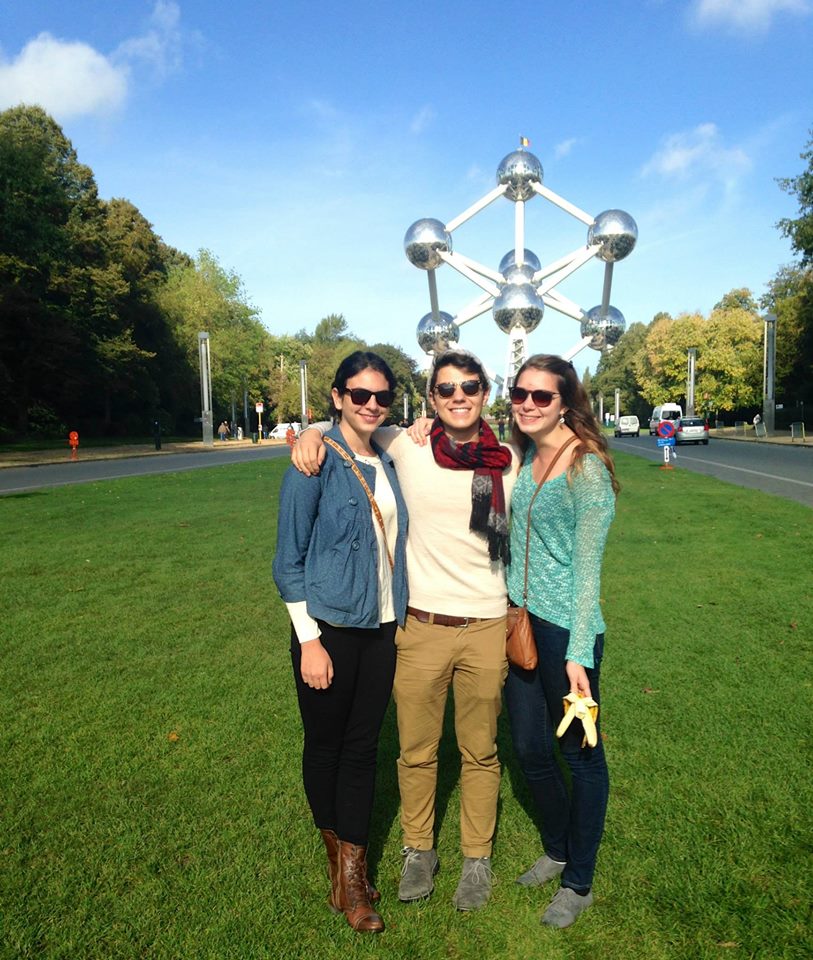 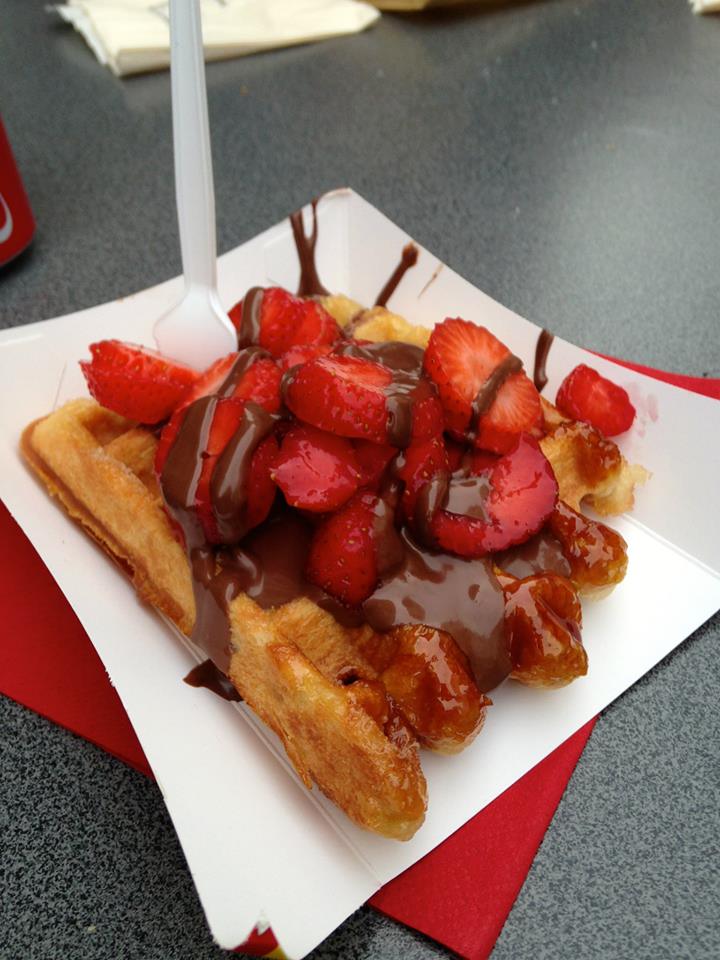 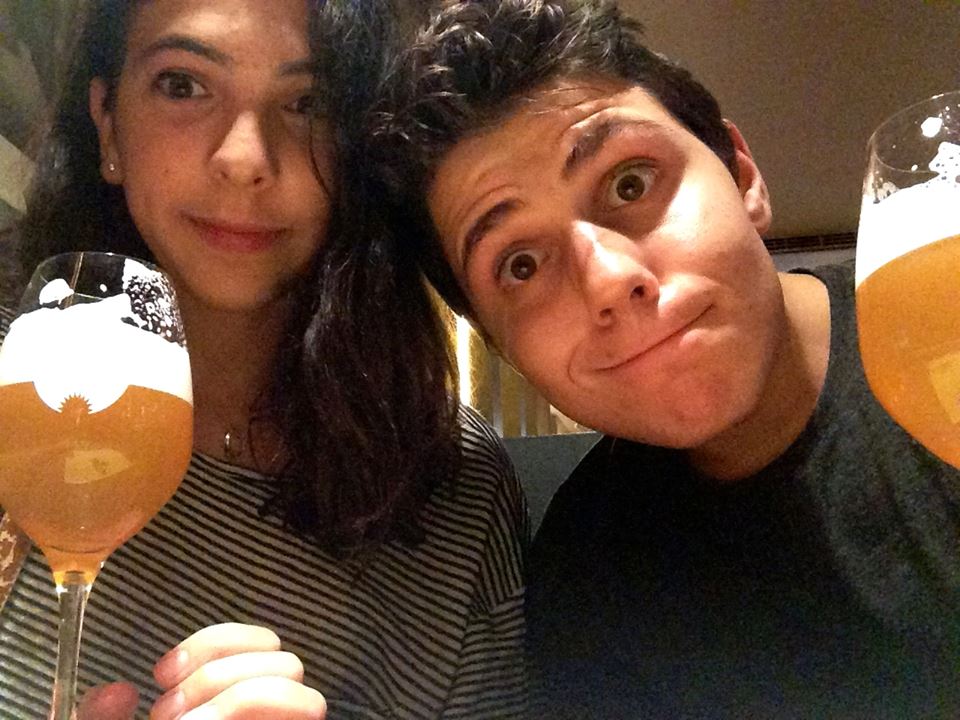 Despite our earnest intentions to get up early the next morning to hit the city early, we opted for a sleepy homemade French brunch instead, complete with mimosas, Edith Piaf, and the pitter-patter of rain on our flat’s windowsill overlooking Brussels’s skyline from our Airbnb flat. Afterward, we set out for the Comic Museum, which ended with us lying in a puppy pile drowsily trying to read German children’s comics aloud amidst giggles and yawns in the museum’s library.

When we’d regained our energy, we ventured back out into the city in search of the Manneken Pis, one of Brussels most iconic cultural marks, which features a tiny, ripped boy peeing into a fountain. When we finally stumbled upon the statue, we were a bit surprised to find the pigmy boy standing only at about 2 feet tall adorned in a vivid rubber rain jacket due to the inclement weather. Just as we were about to take our leave, a man from a local shop turned off the fountain and began to remove the clothes from statue. When he was done stripping the statue, he turned the water back on and, because the water pressure had been building up for a few minutes, I ended up receiving a blast of Mannequin Piss despite the fact that we were standing a good 10 feet away—too bad it was not on one of the days when the fountain is hooked up to a keg and supplies free beer to visitors (see photos below for the before and after). We topped off the night with the usual joviality and gaiety that always seems to ensue whenever beer and waffles are combined and ended up having what we decided could only be called a “quintessential JYA moment” when we went to the Grand Place square and just laid down on the ground and took in the beauty that was literally seeping from every inch of our surroundings. 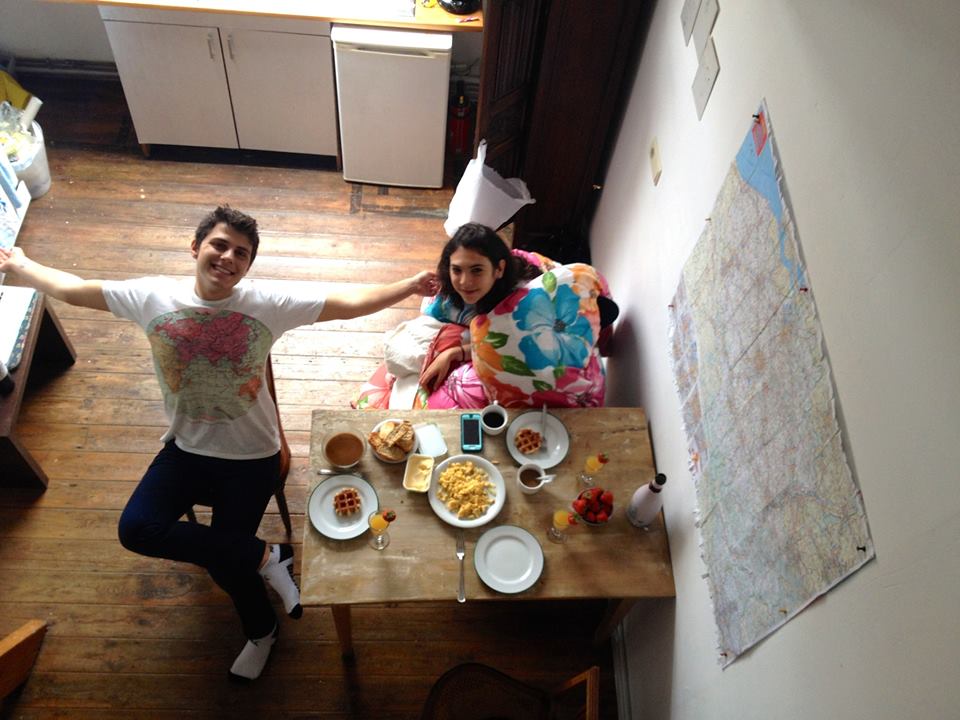 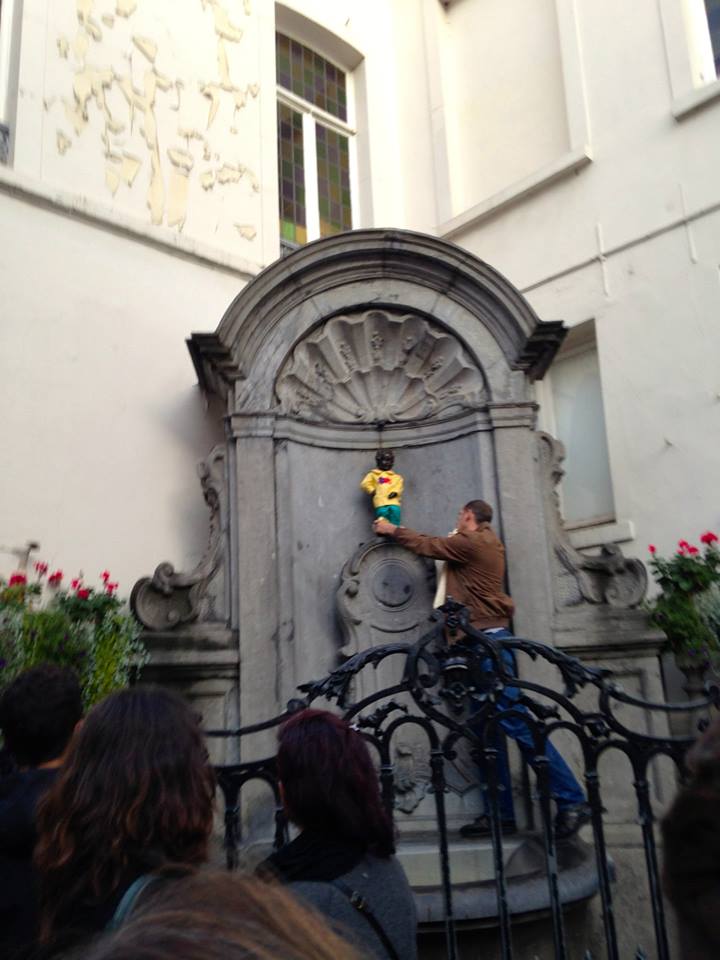 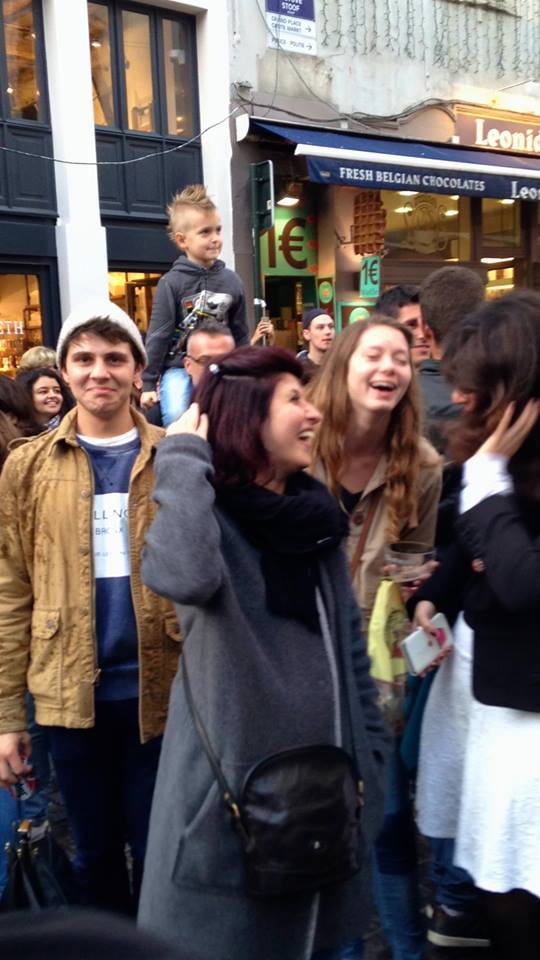 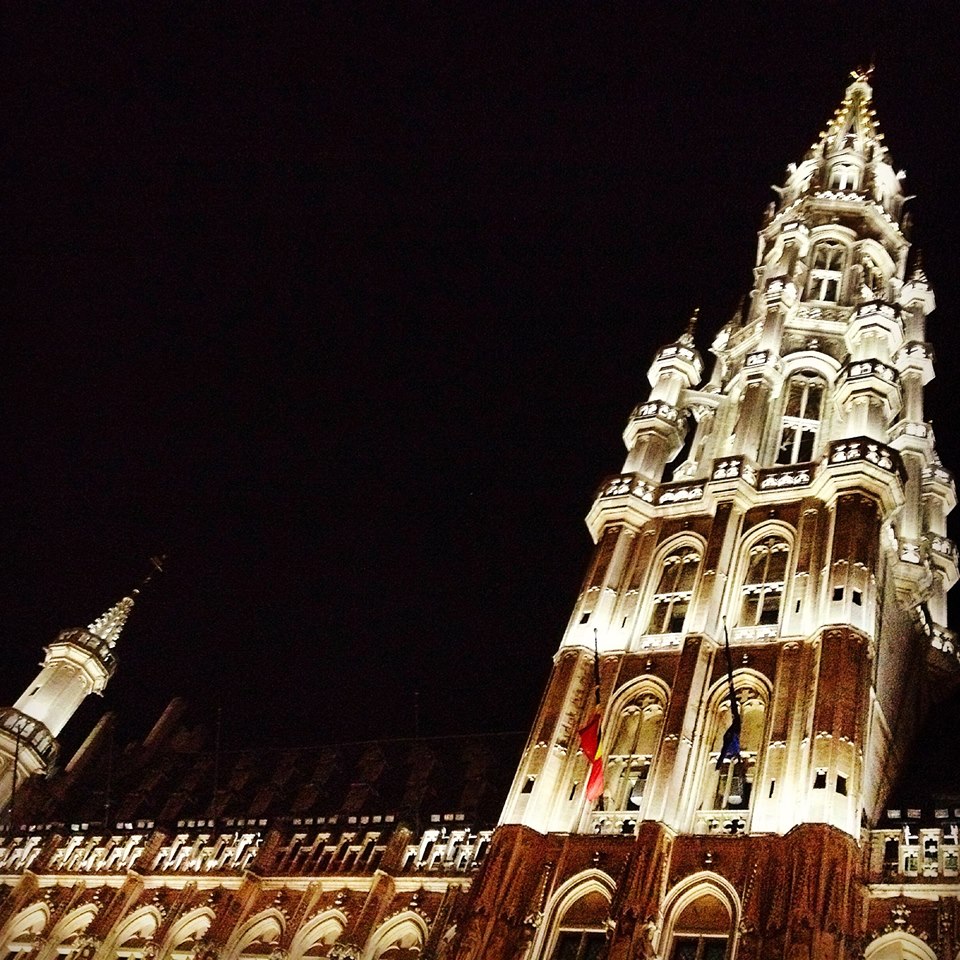 We were all pretty sad to say goodbye to Brussels, but we were also pretty excited to come back to Madrid—with our pseudo families, our love-hate relationships with Spanish food and public transportation, and most of of all, excited to get back to the place we can call “our city.”