Londoners love late-night fried chicken. Seriously. No matter what hour of the day, if you wander for at least three blocks, you’ll find one, if not five, late-night chicken (or kebab) places. They sneak up on you— just like the rain. But the rain is one thing I should not be surprised about.

Chicken and rain aside, I have slowly been learning London as I try my best to not get lost. I finally made my way up to Camden with a few people and found much of it was like an overgrown St. Mark’s place. 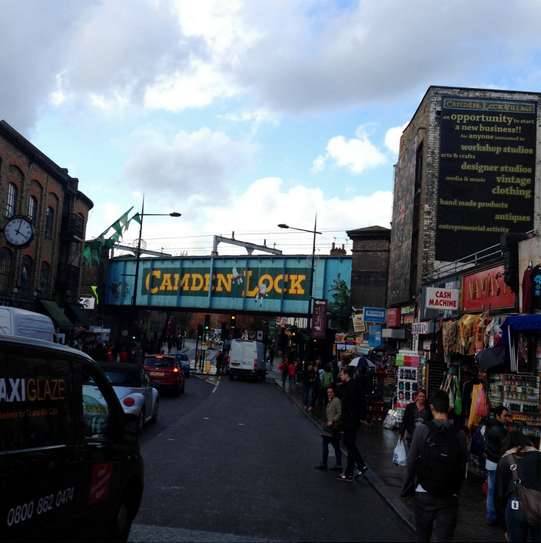 Not that it doesn’t have its charm: Camden’s cluttered streets certainly gave off their own unique vibe. We found a place to eat and later wandered through some of the different markets. The smell of street food made me wish we hadn’t stopped for some overpriced pub grub, but the atmosphere more than made up for it. We navigated cobblestone alleys, bridges and record stores in our quest to feel cool. Naturally, we wound up at none other than The World’s End (of movie fame?) but decided against stopping for a pint…

But as much as I enjoy experiencing the city with others, there are times when I feel the need to get out and explore on my own. I went on a run to Greenwich last week as it’s only about a mile and a half from Goldsmiths. After trudging up what seemed like an endless hill, I made it to probably my favorite place here so far, Greenwich Park. The park is not only massive, lush and secluded, but it also boasts two great museums. After jogging around for a while trying to understand a game of cricket and buying a less than delicious hot dog (my lunch options were limited), I wandered into the National Maritime Museum. The largest museum of its kind, it kept me busy for a few hours as I meandered through exhibits about life houses and the East India Company.

Keeping with the theme of museums, I also ventured to The British Museum to observe a glorious collection of artifacts and remnants of previous civilizations from around the world that the British stole, err, took for themselves. Again, I was following my touristy impulses and made sure to see everything from the Rosetta stone to the Easter Island statue. The museum itself was expansive, and at times I felt uneasy as I wandered through halls of Ancient Greek statues and Egyptian mummies. Museums are wonderful, fascinating places, but they can also feel cold and unsettling, especially for the solo traveler.

Alas, I am also going to school while I’m here. Part of that entails going to Friday class with Professor Bob DeMaria. A few weeks ago, we went to the Victoria and Albert Museum (that’s a lot of museums) and examined several works, both print and manuscript. We were able to examine first hand the evolution of the print industry and had to decide whether there was an “initial shift” in print culture. We saw several Albrecht Dürer prints and some beautiful hand-painted manuscripts. We then got to explore the rest of the museum, but after a short while opted to sit outside in the courtyard and relax.

My other classes have been going pretty well as I do not yet feel the pressure of our final papers that will probably hit me like a double-decker bus come late November. I’ve tried to brush up on Foucault for my Communication, Psychology, and Experience class, but when I realized I owed three pounds for overdue books, I decided to give up on my procrastination and return them. My Media Law & Ethics class has been quite interesting in that everyone seems to be coming from the same background of not knowing much about British Media Law. To be fair, it does seem to change every two weeks. Our professor assigned us books written a year ago that are apparently already out-of-date. They do provide a good framework for the ever-changing laws, however.

In my seminar this upcoming week I am assigned to be “advocate,” meaning I will have the primary speaking role in my group for our weekly mock trial. All pessimism aside, classes are going well and prove to be quite interesting, despite being much different structurally from those at Vassar.

After attempting, albeit not very hard, to go to a few comedy clubs last week, I settled for beginning the research for my independent study project in a more cozy way. I am examining the evolution of British Humor from the 20th century to present day. Thus watching copious amounts of Monty Python seems to be helpful (right?).

I still have to adjust to things here and stop waking up at 11:40 every morning. I’ve decided against playing rugby (phew) and have committed to basketball (which requires a 20 pound application fee and 60 pounds for shoes). It’s not that I am overwhelmed with work, but instead struggle with the need to complete things that are vastly different from one another. It’s all about finding a balance between being productive in school and finding the time to explore. I feel pressure to see as much as possible and enjoy what I’m continuously told will be a once-in-a-lifetime experience.

Seriously though, it rains a lot.