Well, I’m finally here! This is my second full day living in Kyoto. The day I left Tokyo I had to get up at 5:30 AM to make the shinkansen (bullet train). I wasn’t sure if I would be able to because the night before I had suddenly become very sick. I have no idea why, but thankfully I was well enough to travel the next day. Kayla, who also attends Vassar, is doing the same practicum as me, and we both boarded the shinkansen. Truthfully, I was still feeling pretty sick and counting down the minutes until I could get off.

We got off at Kyoto Station, and met with two of the program directors, Katie and Michiyo. The station itself is amazing–huge, pretty, and equipped everything you could ever need. As soon as we stepped outside, we were greeted by the sight of Kyoto Tower, which I definitely want to go up sometime. We were also greeted by adorable elementary schoolers who asked us some pre-written questions in English for a class. The cutest one was, “how do you say ‘hello’ in your language?” To which Kayla replied “Hello!” Katie and Michiyo took us around the area, to a couple cafes and then to our apartment building. I was immediately impressed. I’m living alone in a place called a monthly mansion, which is a small apartment with accommodations that you live in for a month. Pretty sweet arrangement. I’m happy to finally get some real alone time. A month seems like the perfect amount of time for it, too–any longer and I’d probably get pretty lonely.

Then we went to visit both of the places where we’ll be working for the next month. The first was the day center for mentally handicapped people, which is where I’m working for the first two weeks. I wasn’t sure what to expect, but I was pretty surprised. After that, we went to the Bazaar Café, where I’ll be working for the latter two weeks. It seemed really chill, and there weren’t many people there at all. Apparently it’s mostly frequented by students of the nearby college, and because they’re on break the café wasn’t getting many visitors. The guy was so nice, he gave Kayla a nabe pot because she mentioned she needed one!

After that we said goodbye to Katie and Michiyo, and Kayla and I went shopping at the 100 yen store in the basement of Kyoto Station. We both bought a ton of stuff that we needed: towels, soap, etc. I was about ready to crash after that, so I went home and Kayla continued shopping. I watched a ton of Homeland in nervous anticipation of the next day.

But I really had nothing to be nervous about. After being introduced to a few of the staff, I was ushered into a big room where all the staff sat in a circle to discuss the plans for the day. I was introduced to the director, who could speak some English, apparently because he spent some time in New York. They all tried to make me feel welcome, because they probably knew I was kinda scared. I mean, I was the only person there not fluent in Japanese, I didn’t know any of them, and I was in a place I’d never been to before. But that’s what this year is about, right? Doing new things, becoming independent. I do wish I had just one other ryuugakusei (foreign exchange student) with me, though.

First, I went with some of the staff to pick up a couple patients in our handicap-friendly vans. It’s pretty incredible what these people are doing, and with such good moods through it all! I watched them slide tubes down some patients’ noses and throats to feed them liquid food, attach respirators through their necks, and other really tough stuff, all the while smiling and laughing. I’m really lucky to be in their company.

They were all incredibly nice to me, but to be honest, I felt pretty useless. Whenever I offered to help, they usually told me to just wait and not do anything. The few requests I got were easy but at first hard for me to understand with my terrible Japanese. I don’t want to be mendokusai (troublesome) while I’m here–I want to lighten the burden, not add to it. But I guess it was my first day, and it’s to be expected that I’d just be watching most of the time. Plus, they know I’m bad at Japanese and not from here, so they’re very kind and patient with me.

I took a couple pictures when I got back to Kyoto Station, below. There was a water show going on, which was pretty cool. That Auntie Anne’s made me feel better. 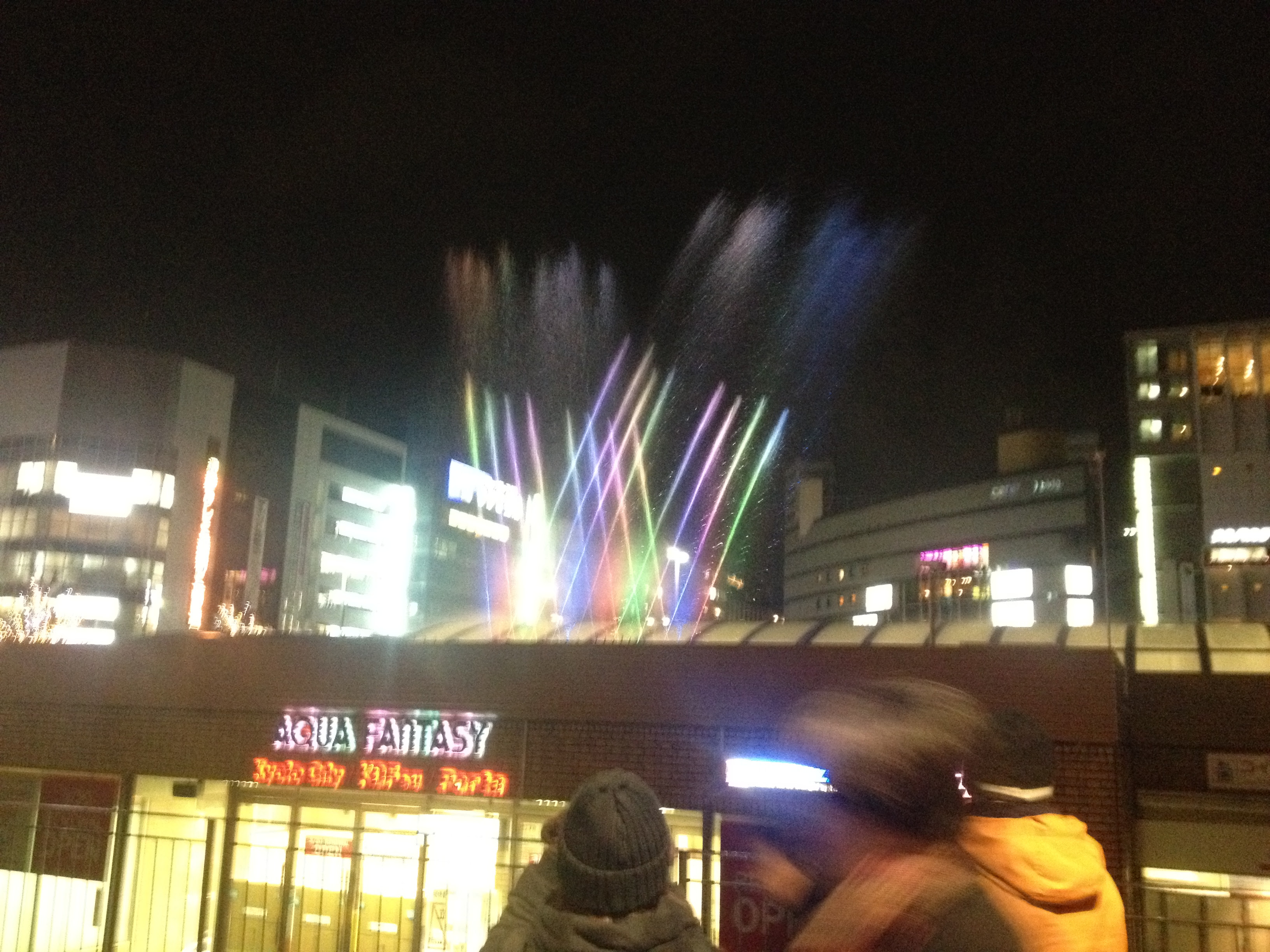 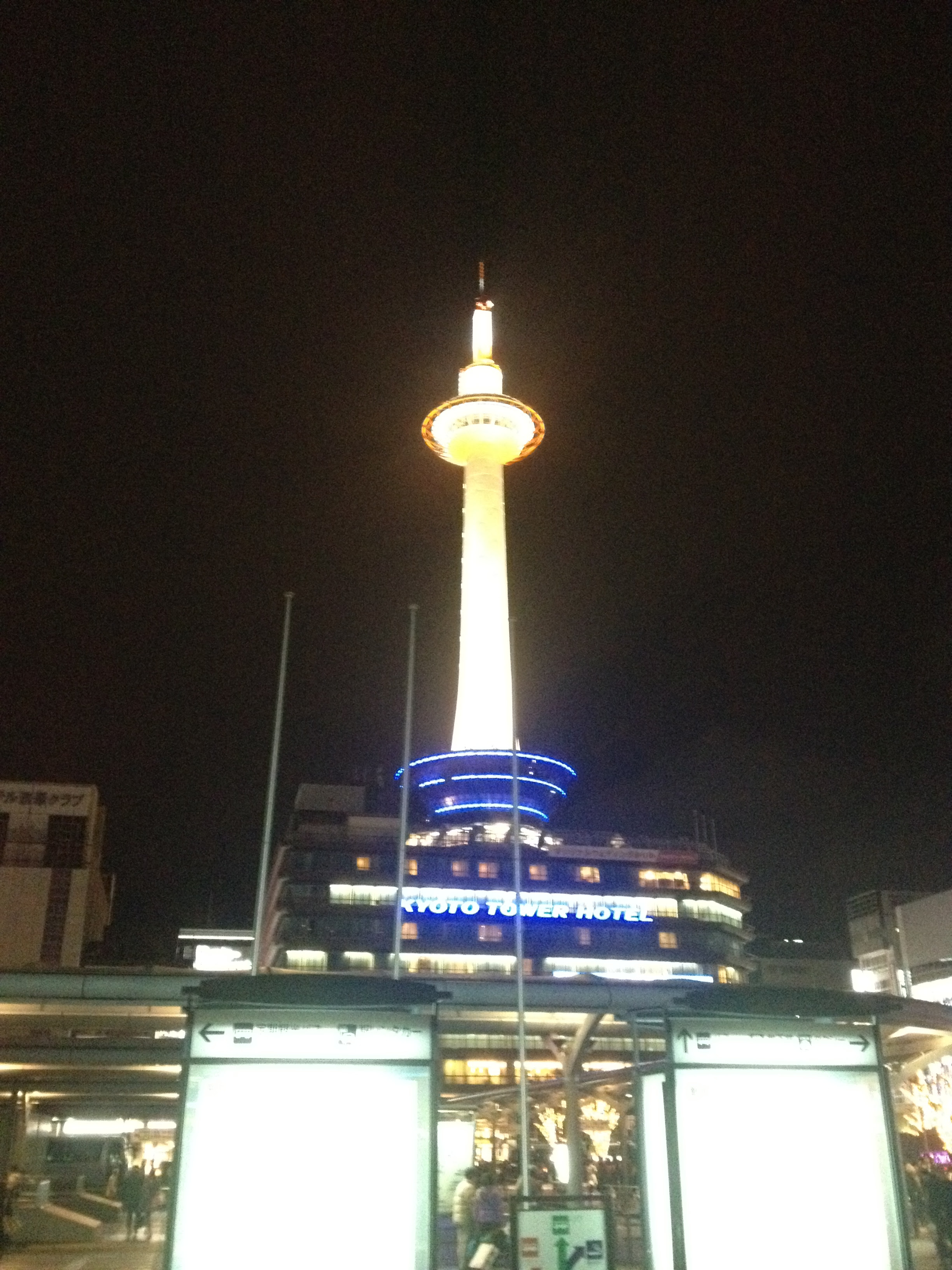 Anyway, thanks for reading. Today’s Sunday, my day off, but I’m back to work Monday. I don’t think I’ll do any exploring of Kyoto today, just relaxing and taking care of things I need to do, but maybe I’ll have something interesting next time!